Resurrection is the theme of Galactic Synchronization as the final act of a 26-year cycle as foreseen by Valum Votan, time engineer of Velatropra 24.3 – what does this mean? What does it mean to be resurrected and what does it have to do with the noosphere?

Of course the theme of resurrection is largely associated with Christ. In 1998, I encountered the brilliance of Christ in a near death experience. After undergoing a life review and purification I noted that an intense light was pulling me back to it, like an irresistible magnet. As soon as I had been sufficiently purged from the darkness of this world a deep love overtook me and I looked up into a blinding light – it was Christ in supreme radiance, the perfected being. 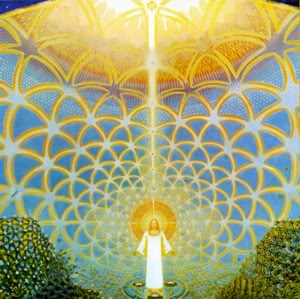 I bowed down to the light and the intoxicating love that I felt.  In coming back to earth, the encounter with such supreme brilliance only highlighted how far we humans have fallen in light of this magnificence. But it also gave me the vision that it is only a “matter of time” before this new light floods into our terrestrial realm, purging the planet of all darkness and infusing it with an earth-shattering LOVE so powerful and a radiance so BRIGHT (brighter than 108 suns) that it will transform everything in an instant!

An ancient initiate once said that the living are ruled by the dead. This is interesting to consider. According to the prophecy of Pacal Votan, Planetary resurrection is the resurrection of the world out of the tomb of delusion – or to be resurrected into conscious awareness (which is the purpose of the Law of Time, “making conscious what was unconscious”).

In the Gnostic perception Christ was viewed as the personification of Nous (divine mind). In other words the Divine Mind descended into Christ. Nous can never ultimately suffer death – it is immortal and is associated with our indestructible fifth-dimensional electrical light body.

Of course Nous is the Greek word for “mind” and root of the word noosphere. Gnostic Christians believed that the redemption of humanity was assured through the descent of nous (universal mind).

“When the uncreated, unnamed Father saw the corruption of mankind, he sent His firstborn, Nous, into the world, in the form of Christ, for the redemption of all who believe in him, and of the power of those that have fabricated the world (the demigurges). He appeared amongst the men as the Man Jesus, and wrought miracles.” — Irenaeus

According to the Gospel of Mary, Jesus himself articulates the essence of Nous:

“There where is the nous, lies the treasure.”

It is interesting to note that after his resurrection Jesus first appeared to Mary Magdalene. So it was the feminine energy who was first imprinted with the vision of resurrection (but will save this for another article).

It is this same nous (noosphere) consciousness that allowed Cosmic History to be received. The information contained within Cosmic History was formatted in the noosphere.

The noosphere is directly related to the electromagnetic field and is therefore a part of the solar field or solar mind. The 13 Moon 28-day calendar (synchronometer) is also related to the Sun as it is embedded in the solar ring. The solar ring is a biotelepathic frequency that we tune into through the 13 Moon calendar. 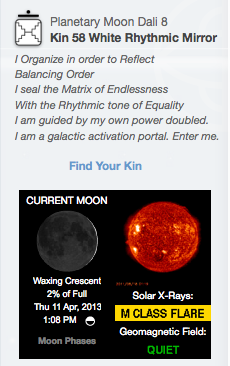 M Class Flare just as this blog was being finished…

Cosmic History states that when the solar ring (of the Inner Sun) becomes completely conscious, time and space will be unified and a new level of harmony will be realized.

So the 13 Moon consciousness harmonizes with frequencies already coded into the solar ring. These are the psi frequencies of other worlds that have attained higher consciousness beyond the evolutionary shift that we are now experiencing on this planet.

Christ was the 13th of his 12 disciples, and some even say that in his time with the Essenes he followed a 13 Moon 28-day count.

In his magnificent book The Second Coming of Christ, Yogananda explains what Jesus means when he says: “I am the Resurrection”:

“He means ‘I am Christ consciousness in which souls rise from a lower state of consciousness to a higher state of inner development.’ When he says ‘I am the Life’ he means ‘my life is one with the Cosmic Life in everything, whereby I feel all living creatures are born out of me and sleep in me.'”

In mystic traditions Jesus was often described as as a solar deity (as was Quetzalcoatl and many others). In the 7:7::7:7, Christ is 4 Sun/4 Ahau which relates to Universal Fire (Sun), Life (Cosmic Life) and Enlightenment (Christ consciousness), and therefore one of the ahau lines of divine light and the Inner Sun.

Of course, the Gregorian calendar was based on the birth of Christ. It is interesting to note that Christmas lands on December 25, which the pagans had originally set aside as the birth of the solar man/woman. Also Christ was born 570 years after Buddha and 570 years before prophet Muhammad.

The stone is also key to the 20 Tablets which declares: “The crystal prophecy is yours to own, by these great powers undo the mystery of the stone!”  The Stone and Sun are symbolic keys of resurrection.

“All of life here on Velatropa 24.3 is from the Sun, and so is all thought by the Sun spun out and projected, but only according to the ratios of time capable of receiving such thoughts.”  —Valum Votan/Mystery of the Stone

The Telektonon is known as the Inner Sun. Sun worship of the ancients was actually recognition of higher knowledge of the pure light being transmitted through the golden rays of the sun.

Kuxan Suum also corresponds to the sipapu (tunnel between the worlds).
Kokopelli returns to release the people of the labyrinth of history into the galactic gardens of Earth resurrected in the fourth dimension of the 13 Moon time (completion of the solar ring).

This golden wire is also associated with the Kuxan Suum, the resonant pathway in the solar plexus center that connects us to the planetary field, sun and ultimately the Galactic Core (see The Mayan Factor).

In the Holomind perceiver codes Christ is base matrix unit 440, the highest number until you get to the 441. He and the other prophets and messengers are located in the ninth time dimension/inner core time. At the core 441 resides Pacal Votan-Valum Votan-Noah – and the Inner Celestial Sun.

In alchemical texts, the Sun was sometimes represented as a shield carried on the arm of the Sun God. This Sun reflected the light of the Invisible Spiritual Sun, the true source of light.

Pacal means solar shield. Pacal Votan is a solar lord or solar discharge who had the mission to reveal a whole other spiritual dimension of reality for the sake of spiritual unification on Earth. This is called harmony in time. From this perspective LORD could be seen as the Light Of Resurrection Day.

Valum Votan/Jose Arguelles who discovered the prophecy of Pacal Votan, had his first vision at the Pyramid of the SUN and first visited Palenque in 1976 after reading Tony Shearer’s Beneath the Moon and Under the SUN. He perceived the Sun as not only the sustainer of life, but also the mediator of information beamed to and through it from other star systems.

He then dedicated his life to preparing the codes that lead us into the Sixth Sun of Consciousness, a stage of total renewal. This is why the Telekonton prophecy is also known as the Talking Stone of Prophecy and is the light of the Inner Sun.

The 28-day Telektonon of Resurrection was revealed to Valum Votan in his 58th year (Kin 58 = Rhythmic Mirror, death signature of Pacal Votan). It was entered on the 27th day of the Rhythmic Moon, Red Magnetic Serpent – sign of Maldek and entry into the Blue Western Castle of Transformation (also 24th birthday of Red Queen = Velatropa 24/Kinich ahau). In the 20 Tablets of the Law of Time he writes:

“Pacal Votan, like Christ
came to show with his own death
the Kinich Ahau star history of death
and apocalyptic redemption
13 Emblems, 13 seals, 13 tones
by which to Navigate
the planetary system of Knich Ahau
the tomb itself a stone metaphor
of the interdimensional synchronometric
navigation cocoon of Pacal Votan…
—from Chronograph 1352, the Pacal Votan files”

There is an earthly sun, which is the cause of all heat, and all who are able to see may see the Sun; and those who are blind and cannot see him may feel his heat. There is an Eternal Sun, which is the source of all wisdom, and whose spiritual sense have awakened to life will see that Sun and be conscious of His existence; but those who have not attained spiritual consciousness may yet feel His power by an inner faculty which is called Intuition. —Paracelsus

15 thoughts on “Christ, Pacal Votan and Solar Resurrection of Noosphere”