The moment has come when the rationally unthinkable may be the only solution remaining in order to allow safe passage beyond the treacherous onslaught of nuclear militarism and environmental poisoning which now threatens the existence of the planet.  –Jose Arguelles, The Mayan Factor, Path Beyond Technology

There are so many time-streams playing out on our planet today, it can be quite difficult to track them all.

How do we make sense of it all as we enter further into the techno-dimensional realm where genetics, robotics, drones, artificial intelligence, synthetic biology, nanotechnology and transhumanism migrate from the realm of science fiction to present day reality?

Many of today’s movies, music and artforms are reflecting the merging of human and machine. It is beyond a science fiction novel to consider uploading a soul from one avatar into another body, or to consider that by 2020 there are plans to have cybernetic armies wired to battlefield matrices.

Since everything ultimately comes from mind, our becoming conscious of world events actually effects the outcome.

Each world leader, whether in corporations, banks, governments, institutions, priesthood, etc. is an actor playing a role of a script set in motion long ago. As we are moving into the consciousness of non-duality, it must be understood that there is an Absolute level and a relative level of awareness. At the relative level we must use discernment, especially in these turbulent (yet exciting) times.

This post merely offers clues, but it is up to each one of us to connect the dots of what resonates within our own being.

In 1952 the tomb of Pacal Votan was opened, releasing and revealing prophecy. This significant time-release event opened a hidden gate that would later be revealed as  the path of the synchronic order, unveiling an entirely new galactic knowledge base.

In this same year CERN (European Council for Nuclear Research ) was formed in Geneva Switzerland and would later build the biggest, most powerful machine ever, the Large Hadron Collider (LHC).  (Keeping in mind that the clock was the first real machine).

Originally the LHC was said to be a physics project allegedly in search of the “God particle”, also know as the Higgs Boson, the element that gives mass to atoms. The Higgs field is found wherever matter is not, and with the Higgs field scientists can alter reality and study the science behind what is called “paranormal activity”.

Having discovered the “God particle” in 2012, the attention of LHC is now focussed on cracking the code of physical form as it searches for dark matter, anti-matter, the origin of the Big Bang, black holes and parallel dimensions.

In 1989, Jose Arguelles made the groundbreaking discovery of the Law of Time in Geneva, Switzerland where he distinguished between two primary frequencies: 12:60 mechanized time and 13:20 galactic/natural time.

In this same year CERN released the World Wide Web (WWW). (Interesting to note that only three hours from Geneva was the home of Carl Jung, who put forth the first treatise on Synchronicity in 1952).

Invented in 1989 by Tim Berners-Lee, a British scientist at CERN. The Web was originally conceived as a way to facilitate automatic information-sharing between scientists in universities and institutes around the world. It was officially made available to the public on April 30, 1993, Kin 57: Red Overtone Earth.

Note that Web or (Inter)Net signifies something that we can be caught or trapped in. In the Book of Hopi Frank Waters states: “This is the fifth sign, the land shall be criss-crossed by a giant spiders web.”

We now know that 96 percent of the Web is inaccessible to the general public. This is known as the ‘dark web’ and can only be accessed through specific programs, most commonly the Tor web browser.

Visitors to CERN report to building 33. Of course 33 is key number for Freemasons. Cosmic Science tells us of the 33 chambers of RA that hold the secrets of electricity in the 13th chamber.

The LHC operates on super electronics or electrical charges motored by a synchrotron, cyclical particle accelerator. A collider is the basic tool of particle physics where they take a stream of particles, accelerate them as fast as possible and then smash them into each other.

A year before the LHC first became active in 2008, Jose Arguelles/Valum Votan received the final codes of the prophecy of Pacal Votan (2007).

He called the mathematical system Synchronotron (unaware of the synchrotron’s existence).

While the LHC is based on finding the origins of the universe by smashing matter, the Synchronotron seeks to gain understanding of the universe through a system of harmonic resonance. It is a telepathic technology.

LHC  is looking for the glue that holds the universe together and the force behind the glue. The Law of Time states that time (as frequency 13:20) is the “glue” or unifying force that holds all universes together and remains constant throughout all dimensions.

Earthquakes, Black Holes and other Dimensions

The method of the LHC is to fire two beams of protons in opposite directions so they smash into each other at a high speed.  Recently scientists at CERN achieved 13 TeV (teraelectronvolts), which according to The Economic Times, is “an energy never achieved by any accelerator in the past.”

If all is vibration, then what effect does this have on the human and planetary electromagnetic field?

The CERN LHC first fired up on September 10, 2008, kin 205. After this occurred earthquakes happened in Iran, Chile and Japan of over 6.0 magnitude.  The next day, the system broke down.

Some say this was a wormhole opened by the combined result of LHC working in tandem with HAARP. Interestingly, the following day President Obama visited Norway where he received a Nobel Peace Prize (while the award announcement itself occurred on the day of the spiral anomaly). CERN began more experiments on December 17, 2012, Kin 203, which concluded on December 21 2012, Kin 207. On this day a black cube was photographed near the Sun. 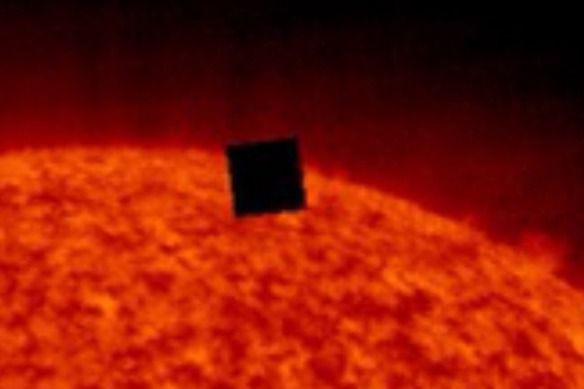 The Large Hadron Collider could open a doorway to an extra dimension and out of this door might come something, or we might send something through it. –Sergio Bertolucci, Director for Research and Scientific Computing at CERN

The idea of multiple universes is more than a fantastic invention and deserves to be taken seriously. –Aurelien Barrau, French particle physicist at the CERN

All is a Symbol

CERN is an abbreviated title for the god Cernunnos meaning “horned one” who is often associated with PAN. His birthday is celebrated on December 21. 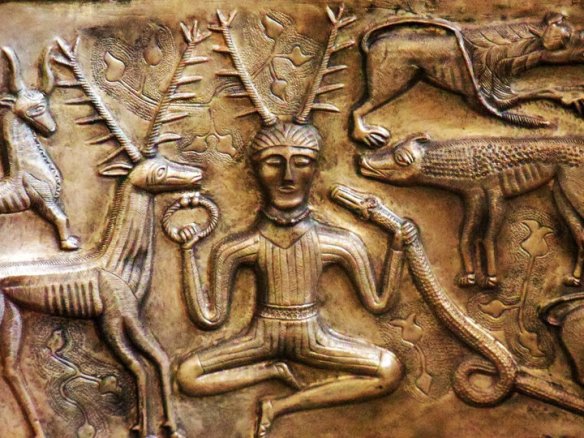 It is said that Cernunnos controls the shadows and is known for death and resurrection after the order of Osiris and Horus. The CERN logo bears the numbers 666 and outside the CERN laboratory is a statue of Shiva, Hindu goddess of destruction. 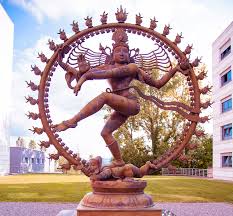 The CERN headquarters is located on the grounds established by Romans as Appolocian location for temple honoring Apollo. Apollo, like Pacal Votan, is a solar lord or sun god. Pacal means solar shield.  In the Book of Revelations verse 9:11 Apollo is known as the one with the key to the gates of the abyss.

Some believe that the LHC will open a bridge to Saturn, and that the grids of the LHC are in communication with its rings which act like a broadcasting station. The Dreamspell Genesis states the origin of the human memory virus has its roots in Saturn and Jupiter:

Origin of virus: double-agent time bandits on Jupiter and Saturn wanting to take over local star system project with 12:60 ratio beam toward Earth to keep time colonists in third dimension. The source of the trouble came from counter-agents who had taken over the planets Jupiter and Saturn … These counter-agents now held the two largest planets of the Kinich Ahau (Solar) system and formed an effective block between the third and eighth orbits, rendering the construction of the time tunnel impossible.

All Paths Lead to Rome

The Vatican is in charge of your daily appointment schedule. If you think you have trouble getting out of this chaotic civilization and you can’t stop the war, that’s because these instruments are owned by corporations, organizations or fictional ghost entities from the Vatican and the Pentagon. –Jose Arguelles/Valum Votan

CERN also has ties with the Vatican. The Vatican owns some of the largest telescopes in the world, including the Lucifer 2 Large Binocular Telescope based at Vatican Observatory on Mt. Graham near Tucson, AZ.  The late Father Malachi Martin claimed that the Vatican is observing something approaching the Earth that will be of key importance in coming years.

Mt. Graham is hailed by the Apache Indian Tribe as one of the four most sacred mountains in the world and is said to be a stargate. There has been a battle with the Apaches who protested the building of this observatory atop Mt. Graham http://nativeamericannetroots.net/diary/471.

This year, on September 23, Pope Francis will meet with President Obama at the White House. This day happens to be Kin 173: Red Self-Existing Skywalker, Obama’s galactic signature and Pope Francis is Kin 23: Blue Planetary Night.

In Dreamspell cosmology, President Obama’s signature is associated with Mars and Pope Francis’ with Saturn. Saturn in Greek is Chronos or the god of time. The city of Rome was originally known as Saturnia or the city of Saturn. Washington D.C. was once also called Rome.

September 23 is the day of atonement, equinox and also the 266th day of the Gregorian year and Pope Francis is the 266th pope to succeed apostle Peter. He is also the 112th and final pope in the prophecy of popes https://en.wikipedia.org/wiki/Prophecy_of_the_Popes

The following day after his meeting with Obama, on September 24, Kin 174, the Pope will address the United States Congress for the first time in history. This day also happens to be the exact midpoint of the 812-day cycle of solar consciousness (see previous post). Four days later, on kin 178: White Solar Mirror concludes the final lunar eclipse of the Blood Moon tetrad.

To conclude:  While LHC seeks to build a bridge to other dimensions through smashing atoms in the search for dark matter, Synchronotron and the Law of Time seek to embody solar consciousness to build the bridge of time for the Return of the People of OMA “Original Matrix Attained.”         Ultimately, Love bridges all dimensions …

Cross beyond the last frontier

of all your hope and fear

and there behold the crystal fold

of what is close and near …