The galactic Maya were star travelers who incarnated here, at a specified time, to seed the planet and to leave clues of our planetary being for this stage of our transformation.

Life as we know it cannot continue. But this is not a bad thing. We all know the problems of the planet. The system of civilization is unsustainable.  Something new and exciting is brewing just below the threshold of waking consciousness.

We are exiting a software program called “history” and entering into a new galactic program, if we so choose (and not all will). What we choose to think and believe in the next three moons is critical for what is to unfold. There is much subtle energy at play at this time.

A main purpose of the Cosmic History Chronicles is to point out that the entire 5,125-year cycle is a particular program, and to prepare our mind for a new galactic program.

It is interesting to observe and recognize this collective, dominant historical knowledge base as it is constantly being fed back to us. Cosmic History Chronicles, Volume I states:

So this knowledge base of the mind talking to itself is an accumulated database that has added to itself each year for the past 5,125 years.

This means that everyday we navigate through 5,125 years worth of conditioned knowledge. It is like we are navigating through the software of a gigantic video game and our job is to turn on the lights in all the dark corners. Melodious bells ring out each time we recognize and uproot conditioned programmings, or choose a positive perception over negative.

In this game, our job is to pay attention to and follow the signs of synchronicity as we make our way through the landscape of history. Each negative that we turn to positive helps the collective bit by bit to reveal the new world (which already exists but is covered over). Each day our goal is to get as many bells ringing as possible, which are then heard by our galactic guardians, who are then able to better assist us.

In 1987, José Argüelles/Valum Votan put forth that this entire historical cycle that we are passing through is actually a galactic beam that is 5,125 years in diameter (3113 BC – 2012 AD). This entire beam cycle also concludes the final part of a 26,000 year cycle, which is part of a galactic engineering project being projected through the Sun.

The beam knowledge first occurred to him in 1986, while meditating on the sunspot cycles at the pyramids of Coba. He had a vision of the 13-baktun cycle as a type of beam emanated through the Sun.

He perceived that the beams are sent from the center of the galaxy (Hunab Ku) and then focalized through the sun as a type of radio program that coordinates the sunspot cycles.

These sunspot cycles then transit the beam through peak solar activity, sending solar information to earth. When the energy beam changes its frequency, the filter (sun) changes accordingly. Different ages represented different stages of the beam. And of course our current solar cycle peaks in 2013.

According to The Mayan Factor, the Maya had a mission to make sure that the planets and star systems of this galaxy are synchronized with the galactic beam by the date we call 12-21-2012. The affect of the beam on earth is the acceleration of human activity around the planet, which we call recorded history. This also creates material technology.

Toward the end of beam, where we now find ourselves, acceleration becomes exponential with 7 billion humans, exponential curves of carbon dioxide, changes in weather, species extinction, war, drought, etc. – this is all part of the program. This is what is known as the climax of history and matter, the end of the 13th baktun – the Baktun of the Transformation of Matter.

Then comes a period of adjustment and regeneration until a new synchronization beam begins, July 26, 2013, galactic synchronization. See this video for a glimpse http://www.youtube.com/watch?v=8REOpIPNZkA&feature=youtu.be

To comprehend the beam cycle it is helpful to re-consider the wave harmonic of history, which first appeared in The Mayan Factor. In this time map the Tzolkin, 260-day sacred count, is used to map out the entire 5,125-year historical cycle. This is the actual information structure of the galactic beam. This holds many keys. 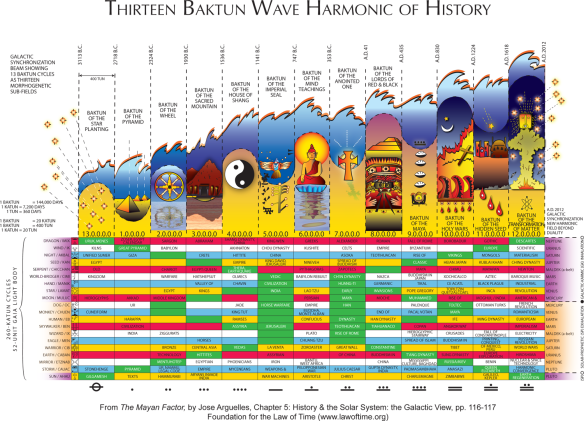 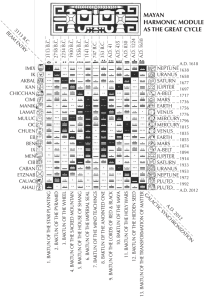 Through studying the wave harmonic of history we can quickly grasp 5,125 years as a single thoughtform. This entire cycle of history can be viewed as a time-release program where one wave or invention builds on another. When this is meditated on it becomes apparent that what we call reality can be likened to a computer software time-release program. It’s the real life Matrix movie.

To further understand this beam, imagine the earth revolving around its axis 1,872,000 times (5,125 times going around the sun). Each time it goes around the sun another 365-days worth of knowledge is wrapped around itself, most of which is meaningless.

Imagine that what is happening as it turns on its axis is that the information structure of the beam is wrapping around the noosphere (earth’s mental sphere). It is overlaying itself on the process of history, reconfirming past knowledge over and over. Each time the earth goes around the sun it wraps a little tighter and tighter. So that when it becomes so tight and history so ingrained that it must reach a climactic point when it all unravels back to essence, back to Source and we begin again. 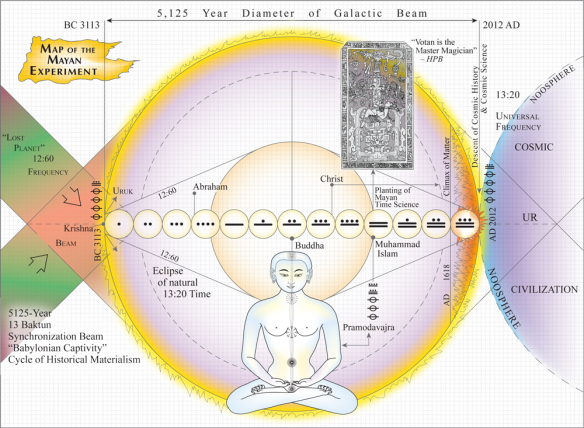