Skip to primary content
Happy 2012!
This poem was written a few days ago for Jose Arguelles by his twin brother and poet Ivan Arguelles. I was very moved by it and felt to share—a good reminder of innocence and impermanence.

I promised to take Mom to Brazil

but she thought you were more spiritual

both of us at once talking at the same

time with the same voice

at the improvised patio table that

dad had painted orange below the

weeping willow below the immense

shadow that we ignored was there

up the street there was a map convention

laid out on a large summer lawn

most of them had purple covers

and spread out we watched dazed

as the yellow boulevards sinuously

made their way from one big city

to another pretending that somehow

we inhabited any one of them

all the time which was better than living

where we did watching carefully

how the lizard traced its course

across the gravel into how much light!

what was true was not necessarily

the right proportion of love

nor the sudden manner in which the years

took us away from each other

from that day in the sun dizzy

with the sheer instantaneity of it

all I mean all and forever

in and out of the same skin “being”

alive grass rushing to be cut

sidewalks crazy for us to step on them

school kids shouting into the evening

the early warnings about dying

the taste of bitumen at the bottom

of the swimming pool where we plunged

eager to swim into some asian apocalypse

to re-emerge wet and drunk

for a single morning waving sweetly

some imaginary record into the sun

the song which laced our ears

with the promise of pyramids

and crowded marketplaces far far away

all I mean all and forever

the two of us disappearing

into a movie theater 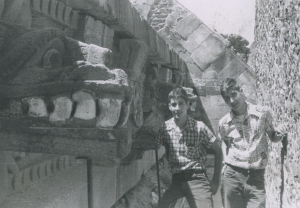 The boundaries of time and form do not exist for Ivan Argüelles – they never have. While we’ve been occupied by the singular idea, trapped in a moment, Argüelles has refused to play by the rules or even accept the need for the game. His poetry exposes that idea as the provisional, phony construct that it is. Where most find chaos he discovers and sings sublime music. Earthy, psychedelic, profane, divinatory and sacred, these Ulterior Vision(s) are another distinct verse in a song that began nowhere and never ends. Through the day after day practice of such poetry this poet is living his work, an other life, an ulterior existence “in the electric dazzling we are.” – Jake Berry