The 13 Moon calendar is not what it appears. In fact, it really isn’t a calendar. It is a coded synchronization matrix that enters us into an alternate universe to prepare our minds for entry into galactic culture.

The 13 Moon/28-day count is not an earth-based system but a gift from the Galactic Maya that serves as a type of dimensional doorway to reorient the human mind to fourth-dimensional time.

It is only in the guise of a “calendar” as a mercy and a familiar bridge for the people of Earth. It is actually a galactic template, a Sirian template, that enters us into the vast realm of the synchronic order.  But it is not really something that can be talked about as it has to be experienced.

The daily affirmations are mathematically coded fourth-dimensional radiograms that open your mind to new potentialities. Like a Zen koan, they are meant to bypass your conceptual mind and tune you into higher-dimensional frequencies.

By learning our galactic signature, we start thinking archetypally of our role within the collective, rather than individually of the personal. Our galactic signature is our password to the fourth dimension; it helps us to identify with the larger story playing out in an objective way where our role is magical and creative.

13 Moons as a Template of Peace

Mathematics are universal and far more creative than they have been given credit for.  Mathematics, inclusive of sacred geometries, define a form that unlocks imaginal structures.

We live in an infinitely magical universe–not a close-ended linear system where the only knowledge that exists was revealed thousands of years ago. The universe is ever changing and creating itself anew. It is happening now – as you read these words.

All the messengers, sages and galactic masters are here with us Now to guide us through this shift of time. Past, future and present are one. We live in a radial matrix of simultaneity that can be accessed daily through the codes of the synchronic order via the 13 Moon calendar.

The 13 Moon/28-day system embraces and synchronizes all true calendrical and mathematical systems, from lunar calendars, to the Mayan long count, to the Elder Futhark runes, to the I Ching hexagrams. In other words this system reveals a master matrix, which contains all other systems.

Keeping in mind also that the Maya used up to 17 calendars at once because their perception of time was not linear, but based on synchronization. The more cycles and systems you can track at once, the more you can observe synchronic overlays. 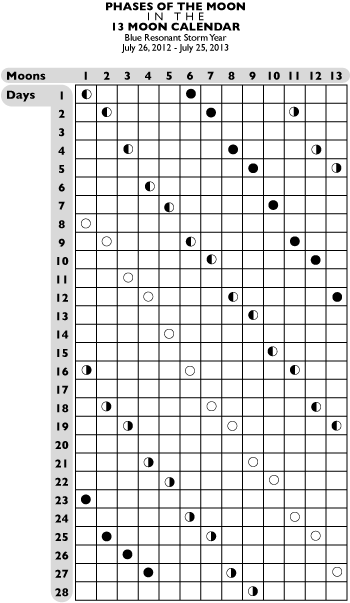 13 Moons as a Sirian Timing Program

As a solar-galactic calendar with a July 26 synchronization date based on the heliacal rising of the star Sirius, the 13 Moon Dreamspell calendar is ultimately a Sirian timing program. (See graphic below: New Sirius Cycle).

In this way, the 13 Moon calendar and tools of the Law of Time are intended to entrain our third-dimensional being into fourth- and fifth-dimensional Sirian wisdom, or the realization of the supermental superhuman.

By placing itself in the measure of the 13 Moon/28-day synchronometer and its precise 52-year/orbital ring cycles, the human is synchronized to the Sirius double universe star cycle, lifting it into a truly galactic-cosmic consciousness and order of reality. —Valum Votan

More on the Sirius code

This Sirian program is further unfolded in the various fourth-dimensional tools such as Telektonon, 20 Tablets, 7:7::7:7 — leading to the ultimate program of the Synchronotron 441 cube matrix system.

The 13 Moon calendar is also the key to enter the Cosmic History Chronicles. This seven volume series lays out an entirely new galactic knowledge base so that we can systematically begin to experience galactic/cosmic states of consciousness in preparation for advanced telepathic technologies including time travel and teleportation.

(Note: This 13 Moon blog entry is in honor of the first anniversary of the passing of beloved galactic messenger Jose Arguelles/Valum Votan on Solar Moon 17 (23 March). He synchronically left the physical plane in 2011, precisely 1328 years after the Great Pacal in 683, from whose tomb his entire life mission was derived).