What is the meaning of the Venus transit and how does it relate to the return of Mexican prophet Quetzalcoatl? 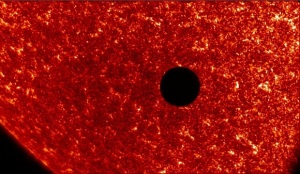 This rare event only happens four times every 234 years and this year occurs 71 days before the 25th anniversary of the Harmonic Convergence. The next one will not occur until 2117.

The 1987 Harmonic Convergence marked the completion of the 13 Heavens and 9 Hells prophecy of Quetzalcoatl, and opened the 26-year doorway to 2013.

Quetzalcoatl, the archetype of spiritual and cultural renewal who vows to return at the end of history, is associated with planet Venus. The return of Quetzalcoatl signifies the return of our multidimensional wholeness and our reconnection to the stars.

The Venus Transit occurs precisely 16 days after the solar eclipse. On this day the Sun and Moon (New Moon) will be apexed over Chichen Itza, and precisely conjunct with Venus and the  Central Star of the Pleiades, in the constellation Taurus.

(Note that this day of the eclipse, Spectral 19, Kin 252, May 20, 2012 also begins the fifth 144-day cycle of Quetzalcoatl, Return of Sacred Power, “Radiate the Power.” See Galactic Spiral Density Wave).

From the Fifth to the Sixth Sun of Consciousness

According to the prophecies of Quetzalcoatl, the world we live in is the Fifth Sun. The Fifth Sun is the Nahui Ollin, the sun of change and movement.

This prophecy says that the present world will be destroyed by movement or “shaking of the earth”, which is analogous to the change of the 12:60 world. In other words, unless we collectively shift our consciousness, the Earth changes may be Mother Nature’s last resort to wake up the collective consciousness that has been heedless of Her subtler warnings.

The fifth world (sun) symbolizes the purification of consciousness in the furnace of matter. Toward the end of the fifth world, the Earth, seized with a yearning for unity—the Great Return—will give birth to a new, purified race whose consciousness will be luminous and whole. This is the actual meaning of the prophecy of Quetzalcoatl’s return…  —The Transformative Vision/J. Argüelles

In the final stage leading to 12-21-2012 we complete the fifth sun, and usher in the sixth sun of total renewal.  This is part of a multidimensional universal unification plan that has its root on other star systems.

The Cosmic History Chronicles contain the seed forms of the new galactic knowledge base that is being brought to our planet. These seven volumes contains the codes and practices to raise our consciousness in preparation of encounter with other star councils or star masters, such as Sirius and the Pleaides.

On the interplanetary level the elaborate Venus cycle of the morning and evening star also refers to the journeys of Quetzalcoatl, who is associated with Maldek (Asteroid Belt) as the plumed serpent. Quetzalcoatl transmigrated from Maldek to Mars to Venus to Earth. The Arcturus Probe says that Quetzalcoatl, Muhammad and Christ all originated on Venus.

In this sense, Quetzalcoatl represents the inner transformation that has to be undergone to attain higher wisdom, and is often associated with the return of Christ.

Note that one of the largest asteroids found was named Quetzalcoatl on Kin 225: Red Self Existing Serpent (March 9, 1953), which corresponds to Maldek.

Quetzalcoatl is also depicted as the feathered serpent symbolizing the merging of heaven and earth. This is the meaning of the circumpolar rainbow bridge global peace meditation: the merging of Heaven and Earth. The rainbow around the earth is a universal image that everyone can visualize. It is the sign of world peace, healing and happiness for all.

We are being brought into greater knowledge of our interplanetary heritage.  The star beings are watching.