The Holomind Perceiver is essentially a hyper sense organ of transcendence. It is a fractal program of the original multidimensional cosmic matrix. Through its activation in ourselves we may learn to perceive radially through the entirety of our reorganized psychosensory and etheric perceptual apparatus. —Valum Votan

This questions and answers session occurred at the beginning of the Lunar Wizard year (2007), 7 moons after José Argüelles/Valum Votan’s initial dream of the number 441.

The Holomind Perceiver represents a fractal of universal time based on a 441 (21 x 21) cube matrix with its origin tracing to the Sirius star council as revealed to Valum Votan. It is part of a system known as Synchronotron.

Hopefully this will be an interesting introduction to those just hearing about this, and for those who have been studying it a while hopefully it will elucidate new ways of viewing the Holomind Perceiver by seeing the process of unfoldment. Let me know if this is helpful for you and I will post more of these …  (If this is new for you, this system can be easily entered daily through the codes of the 13 Moon/28-day calendar matrix: see here for instructions.)

RQ: Let’s start with the basic premise of the Holomind Perceiver – what is the simplest way you could describe it?

VV: Basic premise is that we are always dealing with simultaneous overlays of reality. This is what the Holomind Perceiver teaches us.

RQ: … So would you say this is like a master information grid?

RQ: Does this mean that every piece of information we receive or other knowledge systems can fit into this (441 grid system)?

VV: Yes. Every piece of information that you get you know there is a counterpiece to it someplace. Like right now everyone is out there dealing with sequential bits of information moderated by their egos and they can’t control their emotional bodies so then that can sometimes filter through … and can manifest as really funny stuff on the email.

RQ: So, by learning this what’s the highest that will happen – can we uplevel or shift third-dimensional reality?

RQ: So all of timespace is organized within the Holomind Perceiver chip, but we are just now becoming conscious of it? 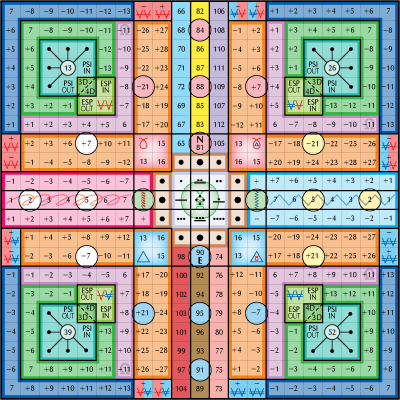 RQ: OK, so now let’s make a bridge from the interdimensional access to understanding it in the third dimension… for example lets go back to the email example – we know we have recently received some emails that didn’t feel in the highest vibrations – were these coming from the preconscious and unconscious mind – how can we perceive this type of day-to-day reality in accord with the Holomind Perceiver?

So most information coming in is from a hardly-thought-out reactive mind of the unconscious that is then made conscious and translated into a script that we, for example, read as an email.

RQ: Totally fascinating… so the mind that it came from might have no idea of the effect it creates?

VV: Yeah and then that unscripted burp from the unconscious has all sorts of unexamined aspects… If we go deeper into the preconscious then this is all the programs loaded into the human that they never even begin to think are programs – that’s how embedded they are. For example, some Americans couldn’t even imagine that there couldn’t be an America.

RQ: because it’s so loaded into the preconscious, like the Gregorian calendar?

RQ: Wow but also loaded into the preconcious (as indicated in CHC Vols. 1, 2 and 6) are the dormant paranormal programs – but… let’s not enter too far into that doorway yet – maybe you would say more about the day-night-summer-winter all-at-onceness radial perception of the planetary noosphere in relation to Holomind Perceiver. 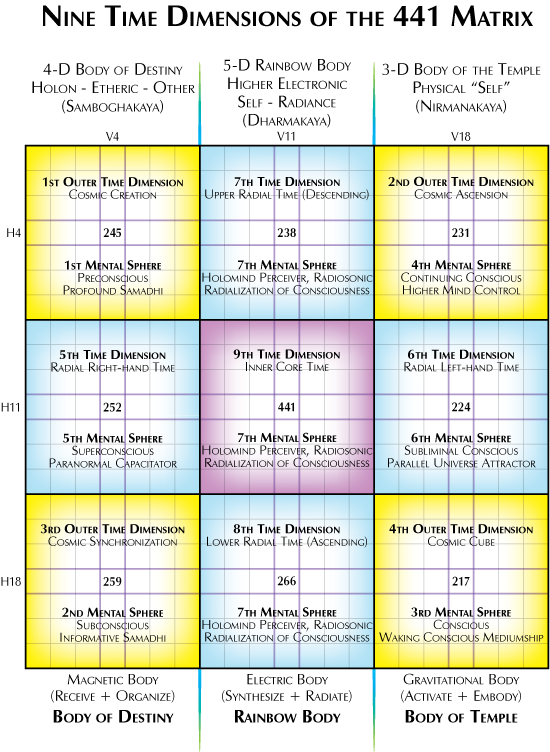 The Cosmic Cube is like the “post”-conscious aspect of preconscious creation. Cosmic creation comes out of the fundamental preconscious state. Cosmic cube takes all of creation and makes is superconscious and it can only be perceived as waking conscious mediumship.

VV: OK, for example it is very hard for us to perceive how a molecule is made… I’ve never seen one being made, have you?

VV: But we know it happens as do a lot of other processes that we don’t know directly about – so the cosmic cube is the “post”-conscious aspect of preconscious creation –

VV: Yes there is definite relation between the third and first mental sphere [corresponding respectively to Cosmic Cube and Cosmic Creation]. Then there is Cosmic Ascension and Cosmic Synchronization [the second and third outer time dimensions] – Cosmic Ascension literally refers to the spiritual knowledge of ascension.

RQ: So the second time dimension (Cosmic Ascension) is like the master synthesizing station of all systems of ascension that ever were?? Like yoga?  And because we are coming to the end of the cycle the synthesis of all knowledge is now being revealed ?

Cosmic Ascension is the higher learning. Cosmic Cube is how all of that is put together, creation, ascension and synchronization and realizing that timespace is a cube … the atoms go around the nucleus, the planets go around the star and all of that is just one vision – the actuality is that it is all a function of the cube matrix…

RQ: Hmmm… let me absorb this for a moment …

VV: Where I am coming from is that I have been initiated into this really rapidly – 7th moon into it – and as you know like 2-3 hours everyday … but it has to be like this so all the information has to be downloaded so I am here and available and it is downloaded into me – I’m totally into it and I am really excited about it … I’m like the engineer and your questions are really important to bring out and help to define and develop it in terms of its meaning…

RQ: OK here’s a question – If we completely master this system what is the Highest, Highest aspiration of what will occur?

VV: The highest aspiration of what will occur is we will learn how to change reality…

RQ: Let’s do it!! And let’s talk about this more … like magically help shapeshift reality into the Highest most superposititve dream so we can see new colors – clear the pollution and get all of our superhero powers back?? How can we do it? Maybe you can break all the parts down into their different functions to study?

VV: Yes, the highest dream is what we are here for! Everything is fractal so it will be easy to break it down – I’m making some graphics for study now … Bottom line is that it is absolutely true that the whole of this knowledge base is already encoded in all of our cells and our capacities to receive and transmit information just the way information is received and transmitted at a universe level … so when we realize this we then see how thoroughly silly the present day reality is – how self-limiting, primitive beyond belief… you have to learn how it actually all works… how it all actually works or what is the secret is the Holomind Perceiver …  It contains all of the codes… 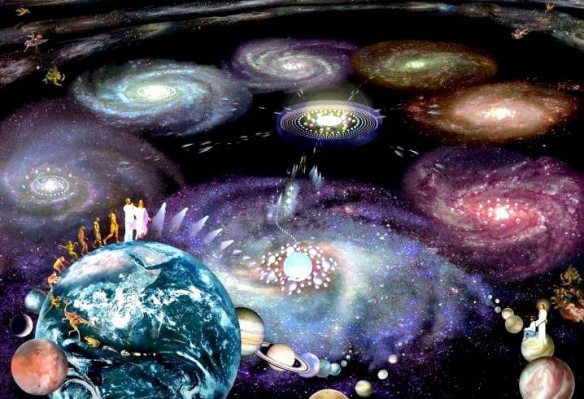