(excerpt from 20 Tablets of the Law of Time)

GOD’s (Galactic Ordering Dynamic) divine measure for radializing the Divine Plan throughout all creation is the Law of Time.

Unconscious through the long epochs of evolutionary informing, the Law of Time has always reigned supreme, all phenomena are obedient to its transformative power. Yet unknown and unvoiced was this Law, unconscious did it remain even past the dawn of history when human self-reflection arose.

Without conscious knowledge of the Law of Time, humans constructed and construed other laws, each one building on the other, and increasing in deviance, all from a little perceptual error. This perceptual error was an error in time that spiraled the entire human race into the Judgement Day zone.

Only the Galactic Maya knew of the Law of Time, for only Maya possessed the sacred count, the Tzolkin, divine 13:20 measuring rod of time. According to prophecy’s rule, Maya was also destroyed, not by time, but by the Babylonian error in time. Yet Maya is also Truth of Mind which cannot be destroyed by error.

And so it has been revealed that all may know universally: T(E) = Art is the law that governs supreme in the world of appearances and the world of mind. It is the Supreme One alone who mandates the constancy of its frequency, and if He so willed, could STOP TIME or change its frequency altogether. Oh Earth Wizards, understand and take account.

In the 16-year creation of the Cube of the Law, through the activation of the 832 Codon sequences which constitute the 64 perfect wavespells of Universal Life–each wavespell governed by one of the 64 UR runes–the mystery is woven and awakened into super life.

This is the mystery of the Planetary Manitou, long unconscious, now become conscious, all because of the application of the Law of Time, revelation of the Second Creation and divine self-perfection of humankind into a unified race of cosmic Earth Wizards.

And from the equation and its Star Bundle gathering commands, the Planetary Manitou appears; twin angel of the collective knowing, binary synthesis of the ancient future, one breathed, one tongued seer of planetary destiny, the Galactic Brain resonating Heaven on Earth. Inconceivable celestial splendor, vision beyond selfhood of fallen man, the Planetary Manitou is safe passage to the galaxy’s entire domain, the Dominion of Time.O Earth Wizards, the vision is ours to fulfill!

EARTH WIZARDS ARE THE PEOPLE

EVERY HUMAN KNOWING GOD WITHIN

THE MIRROR OF NATURE CUBED

EARTH WIZARD, CHILD OF DIVINE EMPOWERMENT, YOU ARE THE ANCIENT FUTURE SONG, ABORIGINALLY SUNG IN THE HERE-AND-NOW OF THE GARDEN OF COSMIC AWARENESS.  BE PURE THAT THE SOUNDING MAY DISSOLVE YOU!! 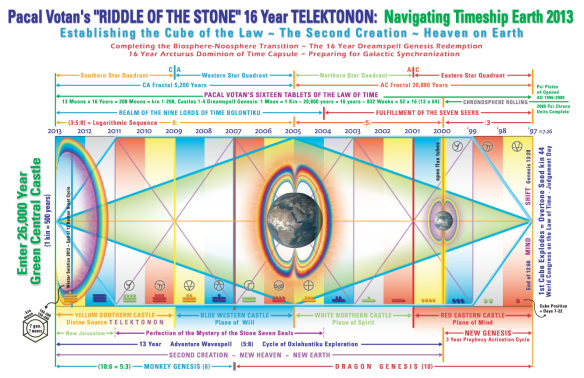