With the rapid transformation taking place on our planet and with all the upheaval within and without as the forces of destruction  seek to separate and obliterate us, we are called once again to the memory of the Greater Dream.

In the times we are living I am reminded of the 1998 movie Dark City. The movie opens with the narration: First came Darkness and then came the Strangers.

In this movie there is no sunlight, and the rulers of the city can control the memories of its citizens.

The premise of the movie is that the Strangers came from another galaxy and collected a group of humans to study them. Their civilization is dying. They create a vast artificial city on earth, which can be  “tuned,” whenever they want to run another experiment.

When the tuning takes place, everthing become frozen in time. All machines stop and all humans lose consciousness. At this moment the Strangers make changes to the city. They create new architecture and set up rooms and props in place for the humans enactment.

The main character is immune to the power of the Strangers. The memory injections do not work on him.  This is our task to become like the main character by working to raise our frequency above all the systems of control and penetrate the world of false light.

The memory of this movie kept arising on a recent visit to the pyramids in Mexico. I had not planned to go, until Don Jesus contacted me from Mexico. He had served as firekeeper at the seven day earth wizard event in 2000 with Jose and Lloydine, and vowed to keep the flame alive.

He was also present at the ceremony on March 3, 2002: Yellow Galactic Seed atop the Pyramid of the Sun where Jose was honored for his lifelong work by 9 shamans who presented him with a sacred obsidian staff. Nine days after this ceremony came the first Cosmic History transmission.

Don Jesus’ call came while I was in the midst of writing The Uninscribed (tentative title), the story of my initiatic journey with Jose Arguelles/Valum Votan from the feminine perspective.

The message was clear that I needed to return to Mexico to complete the book where the original prophecy was layed.

I am still in the midst of the journey and  in the process of assimilating all the impressions and energy received. I am feeling deep shifts in the core of my being as if knowledge is being rearranged into a new internal architecture that I cannot quite yet articulate.

Kin 218 is the signature of the opening of the tomb of Pacal Votan, June 15, 1952 (and 218 is also the combined signature of 11, 22, and 185).    This was the first time that I had the spaciousness to just “Be” and “Feel” in meditation for three days at the pyramids. I experienced  Palenque as not so much a localized place, but an architecture of knowledge meant to be embodied.

I felt deep gratitude, knowing that I would not be here without the work of Jose Arguelles/Valum Votan. His task was to reveal the harmony of form, an architecture of wholeness based in time.  His discovery of the  synchronic codes, mathematical in nature, equip us with a multidimensional lens in which to decode “reality.”

These codings, when applied with a receptive mind, form keys that unlock different levels of awareness.

Jose Arguelles/Valum Votan with close friend Alberto Ruz of the Rainbow Nation. Ruz father was the archaeologist who discovered the tomb of Pacal Votan.

After Palenque, we journeyed to Teotihaucan together with Noelle, 5 Eagle, Karina, 13 Wizard and Mertxe, 12 Storm from Spain. This was on Kin 9, February 13, New Moon and Chinese New Year: Year of the Yellow Earth Dog.

The ancient city of Teotihuacan is unparalleled in its monumental design and planetary significance. It has been described as a combination of Rome and Mecca of ancient Mexico.

Teotihuacan is the place  where Jose Arguelles/Valum Votan’s mission was recognized in him (1953) and where he was recognized for his (inter)planetary role (2002).

In 2000 he had a powerful dream where he was  informed that all of the knowledge of the planet is locked into the codes of the information templates that are in or beneath the Pyramid of the Sun and in relationship to the layout of the rest of the city of Teotihuacan. 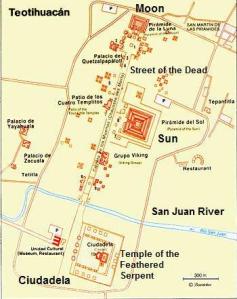 On this trip we were honored to be taken into the caves near Teotihuacan by Mertxe-Cosmic Sun (here in yellow), a magical being and shamaness who is the guardian of the caves.

There were 17 of us total for this powerful and unexpected experience. Much more could be said about this, particularly the cave of elves,  but will save that for another time.

The 17 is significant as it is the kin of Self Existing Earth or Nahui Ollin which corresponds to the fifth sun (of consciousness). Nahui Ollin is known as the “day of the shaking earth” and is associated with Mexican prophet Quetzalcoatl.

Mertxe then took us back to her magical property overlooking the pyramids and filled with the codes of time. Seeds were planted for a return event at this inspiring space. We walked the rainbow labyrinth and after appeared rainbows in the sky.

The day of our visit was 35 days before the 7th year anniversary of Votan’s passing on the 17th day of the Solar Moon (March 23). During our sharing  in Mertxes sacred pyramid room, a 7.2 earthquake occurred in Oaxaca, Mexico.

Main message from this trip: We are the progenitors of the birthing of a new cosmic reality. This is a reality that has not yet been experienced in the human realm.

As we begin to awaken more and more we notice multiple realities are occurring simultanensouly. This is natural and nothing to make a big deal about. This realization makes us a lot let judgmental of the 3D realm and what others choose to do.

Our body is a timeship, the highest technology. Learn to listen without analyzing and the interdimensional portals will open. The zuvuya circuit speaks through Nature and through humans who are attuned.

When we are operating on a harmonic matrix then from this consciousness all knowledge comes to us through gnosis or direct experience, from genesis to revelation. This reality already exists, it is up to each one of us to discover it for ourselves and to first individually and then collectively shift to a more harmonious timeline.