Jose Arguelles/Valum Votan prognosticated that the artificial technosphere will culminate eventually in the awakened noosphere, the planetary sphere of thought, and its collective intelligence.

When the noosphere becomes fully conscious, it will invoke a new field of awareness with possibilities yet undreamed.

The following is the Introduction to the Rinri Project by Jose Arguelles/Valum Votan in regard to the biosphere-noosphere transition. We post it today in honor of his 81st Solar Return on Resonant Moon 15, Yellow Magnetic Warrior. January 24, 2020.

“Planet Earth is distinguished by a biosphere: the dynamic living web and region for the vital transformation of cosmic energy.

This planetary life-support system is characterized by a continuous circulation or biogenic migration of a finite set of atoms.

This continuous interaction of changes of atomic states produces vast geological epochs in a complex of biogeochemical functions and processes.

The incidence of change in the biosphere is an exponentially cumulative complexification of structure realized in the appearance of self-reflective thought and its geologically impactful climax, the rise of the machine.

This climactic moment of uncontrolled acceleration of the biogenic migration of atoms is referred to as biogeochemical combustion.

The machine is a biologically induced function of an artificial (12:60) timing frequency. The machine possesses a capacity for an increasingly rapid feedback process.

As with any other biological form this results in the propagation and multiplication of more machines of increasingly diverse types.

As an externalized biological projection, the machine requires an equally rapid propagation and multiplication in the species generating the machine.

The machine is the chief agent contributing to the condition of biogeochemical combustion.

Homo sapiens, the machine-generating species, is itself unconsciously absorbed in the irregular, mechanistic and exponentially accelerating process of the artificial 12:60 timing frequency.

As a consequence, humanity as a whole is unaware of the degree to which it has deviated from the biospheric norm of the biomass constant.

The biomass constant is the principle by which the biosphere maintains its dynamic within its otherwise highly limited surface space.

From the perspective of the biospheric whole, the machine-generating species has ruptured its biogeomagnetic resonance.

Biogeomagnetic resonance is the condition by which any organism maintains itself as a whole, indivisible from its support medium, the biosphere itself. As a species, humanity has brought upon itself and the biosphere the critical situation of biogeochemical combustion.

Biogeochemical combustion itself is the function of the increasing impact of self-reflective thought upon the biosphere in the form of a civilization driven by the resource-consuming needs of a machine technology.

The sum of this biogeochemical climax produces the irreversible condition known as the biosphere-noosphere transition.

The climax of the biosphere-noosphere transition will result in the creation of a new geological epoch, the Psychozoic era.

In the biosphere it is not individuals that survive, but whole species. Successful entry into the Psychozoic era is totally dependent upon the entire machine-generating species itself consciously initiating and completing the biosphere-noosphere transition.

This momentous undertaking will induce the positive manifestation of the psi bank: the underlying mechanism governing the evolution of life and thought within the biosphere.

The manifestation of the psi bank will signal the advent of the noosphere, the telepathically unified mental field of the planet, which is the prime requirement for the creation of the new geological epoch, the Psychozoic era.

The nature and immediate purpose of the (Rinri Project) experiment is to correct the biogeomagnetic perturbation caused by the machine-generating species. The human species, along with the sum of all life in the biosphere, is a function of the biopsychic field of resonance.

The biogeomagnetic perturbation of the biopsychic field is now adversely affecting the other two fields of planetary resonance: the electromagnetic and the gravitational.

The exponential increase of dissonance in one field, the biopsychic, inevitably affects the other two, for all three function together as a whole system regulatory unit.

Since the perturbation within the biopsychic field is biogeomagnetic in nature, a magnetic stabilization is called for. This is referred to as the magnetic re-education of humanity.” 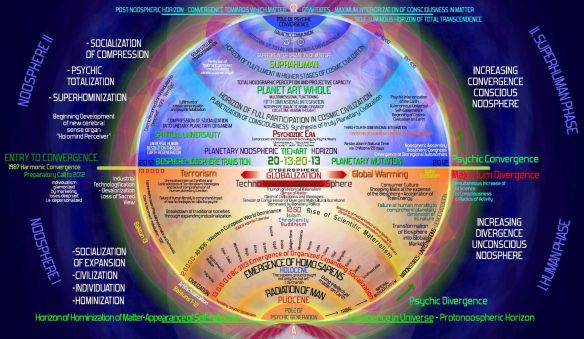 16 thoughts on “A New Field of Awareness: Noosphere”