Thirty-three years ago on August 16-17, 1987 (Kin 55-56), was the Harmonic Convergence, the first synchronized global peace meditation with the purpose of synergizing the Highest Collective Intention of Humanity.

Many know these dates as a time for unity and globally synchronized meditations. Few know the origins, the prophecy and the key events leading to this date. Here we will give some fascinating highlights.  The entire story can be found in 2012: Biography of a Time Traveler.

The dates of the Harmonic Convergence were based on prophetic events beginning with Good Friday 1519 when Cortez led the invasion of the Spaniards into Mexico. On the Mexican sacred calendar, it marked the precise end of a 52-year cycle. Since then, nine 52-year cycles had elapsed and came to a close on August 16-17, 1987.

This also marked the last day of the nine hell cycles as prophesied by Mexican prophet and culture hero, Quetzalcoatl, credited for bringing knowledge of the sacred calendar See previous blog: https://1320frequencyshift.com/2012/05/17/quetzalcoatl-and-jose-arguelles/  The number nine (1+4+4) is especially significant because early Americans believed there were nine levels of the underworld through which the dead must descend.

Harmonic Convergence is well known by many, but what is the story behind it?

The dates were first given to José Arguelles by Tony Shearer in 1969. Tony was a poet and storyteller with a special interest in Quetzalcoatl and the sacred calendar of ancient Mexico. 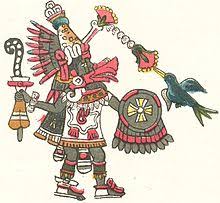 On their first meeting, Tony revealed to José the prophecy of Quetzalcoatl, Thirteen Heavens and Nine Hells. Tony said the prophetic dates, August 16-17, 1987, were revealed to him by a mysterious female “curandera” (shaman) in Oaxaca, who came from a “long lineage of shamans.”

Tony explained that each of the thirteen heavens and nine hells refers to a 52-year cycle.

Thirteen heavens of decreasing choice, nine hells of increasing doom, followed by the time of Great cleansing and purification. 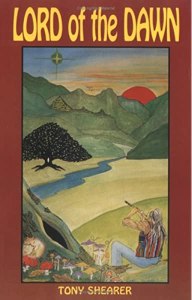 During this time, José became close with Visionary astrologer, Dane Rudhyar, who watered the seeds of prophecy planted in him by Tony. These two men inspired the conclusion of his 1975 book The Transformative Vision, which describes the period between 1987-2012 as the planetary interchange of tinctures to create wholeness.

Flashforward to December 1, 1983, Kin 2: José, was in Los Angeles visiting author and visionary Marilyn Ferguson. Here, he met Paul Shay, of the SRI, and Richard Hoagland, a former science investigator and writer. Hoagland had been with NASA when the Viking Space Probe sent back pictures from Mars on July 25, 1976, including the controversial “Face on Mars.” 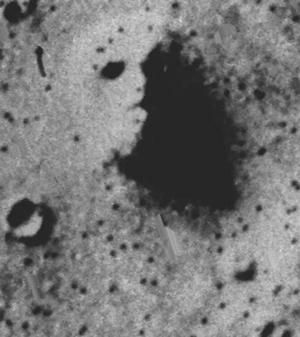 José was stunned when Hoagland showed him the original photographs.

Deep recognition resonated through him and he felt a million years of cosmic memory reawakened in a flash. Great streams of memory flowed from the Martian face into his being in what felt like vast spaces and eons of time.

To José, the face verified the certainty of existence on previous worlds; this meant all of human history had to be re-envisioned. He thought if DNA is truly unitary and if a form of DNA has been verified on other rocks from Mars, then that proves that life exists on other worlds! In the shock of recognition, he felt great weights of false intellectual baggage fall away, as he was reminded, once again, of his cosmic essence.

A few days later came the vision for the Harmonic Convergence.

While driving down Wilshire Boulevard the next morning to return his rental car to the Los Angeles airport, José felt something strange occurring and pulled into the nearest parking lot.

Here, he had a powerful vision of the conclusion of the Prophecy of the Thirteen Heavens and Nine Hells. He pulled out his notebook and fervently drew the vision of many people lying on their backs in a circle with their heads pointing toward the center where a blazing fire was burning. All of the faces were looking skyward, just like the Face on Mars!

Key events leading up to the Harmonic Convergence

1985:  In the spring of 1985, Jose is introduced to Mayan day-keeper, Hunbatz Men by Domingo Diaz Porta, leader of the Great White Brotherhood. A few moons later Jose’s beloved friend and mentor Dane Rudhyar passed away and José is last to view his body.

1985-87, During this time José met Jim Berenholtz, a Los Angeles ethnic musician who had the same vision of hooking up artistic networks on Earth to affect global change. José and Jim agreed which were the main sacred sites in the world; they knew if these sites were activated, then the Earth could come alive again.

José, with the help of his wife Lloydine, worked tirelessly to prepare people for the Harmonic Convergence, including endless promoting of “art as everyday life” and “art as an instrument for global change.” They launched a word-of-mouth Harmonic Convergence campaign calling for 144,000 “sun dancers” to gather near sacred sites at dawn on August 16-17 to open the doors to the final 26 years of the 5,125-year Mayan Great Cycle. 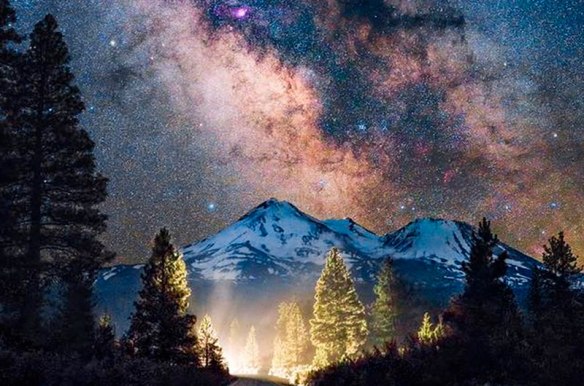 Mount Shasta was a key sacred site that people flocked to during Harmonic Convergence.

Harmonic Convergence gained the attention of every major television network and news magazine from the Wall Street Journal to Newsweek. 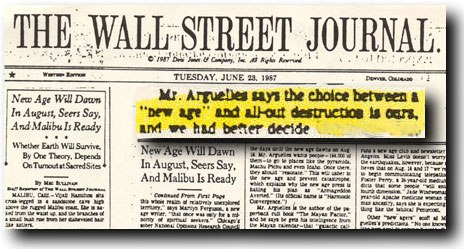 José knew that the Harmonic Convergence was an event with meaning extending into other dimensions. What was occurring as a prophetic enactment on the third dimension was something that had been previsioned and foretold at a higher level, in another dimension and in another time, by seers whose sole purpose it is to monitor the karmic unfolding of this planet.

“… August 16, 1987 marks the conclusion of an 1144-year cycle initiated in 843 AD. It is also significant that the date 843 AD marks the ebb and disappearance of what is referred to as classic Maya civilization.

“ …While August 16, 1987, may mark the end of history, or actually, the reversal of the historical process that was set in motion by August, 3113 BC, December 21, 2012, marks the end of the present stage of evolution and the beginning of the next.

“The 25-year interval between the two dates marks the time during which the obsolescent, polluting and self-destructive tendencies of civilization are abandoned and the apparatus of civilization itself taken down. At the same time it marks a period of ever-increasing harmony in which the frequencies of the Crystal Earth make ever more apparent the wondrous moment of transformation that swiftly approaches.”

The Mayan Factor and Harmonic Convergence

José wrote his best-selling book The Mayan Factor to coincide with the Harmonic Convergence. It was published on Good Friday, April 16, 1987, twelve days after the passing of his teacher, Chogyam Trungpa Rinpoche. It was also Good Friday 1519 when Cortez led the invasion of the Spaniards into Mexico.

In the August 11 edition of the New York Times, in the article: “New Era Dawns—or Just a New Day?” José was quoted:

…The vibratory infrastructure holding the Earth together is in a condition of intense fever called resonant dissonance. Influences such as the arms race and insults to the environment could cause the breakup of the Earth into smaller bodies not unlike the Asteroid Belt…This can be averted, by harmonic convergence achieved in a synchronized collective of human beings, through which the possibility of a New Heaven and a New Earth is fully present.

In a press release for The Mayan Factor, José described who the Maya were (are), elucidating the meaning of the Mayan’s role in the Harmonic Convergence:

The Maya were planetary navigators and mappers of the larger psychic field of the Earth, the solar system and the galaxy beyond. … The  purpose of the Mayan return is to assist humans in aligning with the cosmic whole. This will lead to conscious operation within the greater community of galactic intelligence.

July 26, 1987, Kin 34: José gave a presentation to an overflow crowd at St. John’s College in Santa Fe to announce the coming of Galactic Culture. Viewing the Harmonic Convergence as the first Mayan return point, José declared that their presence would be perceived in a myriad of ways, according to an individual being’s belief system.

This day was the official start date of the 13 Moon count and what would later be known as the Wizards Count or New Sirius Cycle. (July 26 corresponds to the rising of the star Sirius).

On the morning of August 16, José arose at sunrise and blew the conch 144 times, 36 times to each of the four directions. Astrologers noted that this day marked a grand Trine alignment of Sun Moon Mars and Venus conjunct in late degrees of Leo and Six out of the 8 planets were forming a Grand Fire Trine.

That afternoon, he and Lloydine drove back down to Boulder to join Barbara Marx Hubbard at KGNU Studio for a live global radio broadcast to all the sacred sites around the planet, including the Great Pyramid, Stonehenge, Mount Shasta, Glastonbury, the Black Hills of South Dakota, the Temples of Delphi in Greece, Woodstock and Central Park (New York),  Sedona (Arizona), Mt. Fuji (Japan), Mt. Olympus (Greece), the Ganges River (India), Popocatepetl (Mexico), Mt. Haleakala (Hawaii),  etc.

The Harmonic Convergence marked the first time human beings simultaneously coordinated their prayers, meditations and ceremonies at sacred sites around the Planet. Many people’s lives changed at this time. This was the first manifestation of a networked thrust toward a unified moment of collective synchronization. Everyone from Shirley MacLaine to Timothy Leary to John Denver celebrated the event.

For the diseased civilization is now out of control, and the Earth is thirsty for its sacred warriors to return. –José Arguelles