This project regarding Timeship Earth 2013 is your special mission. Understand and unravel why this is so, and in that time known as AD 2013 you shall return to your home star.

Our minds are made of stories. But through stories and myths our mind is able to understand deeper truths. A psychomythic cosmology gives our mind a way to grasp what is otherwise ungraspable.

As we phase out of this 5,125-year galactic beam, we are also phasing out of the last fifth of the 26,000-year beam (cycle) as well. In the Dreamspell cosmology this 26,000-year cycle is divided into three geneses: Dragon, Monkey and Moon. http://www.lawoftime.org/timeshipearth/dreamspell.html#castlegenesisindex

We are now completing the Monkey genesis and are set to enter the Moon Genesis on Galactic Seed (26 July, 2013). This is the point of fractal replay; like a zuvuya loop where we as a species find ourselves in the same set up as we were in 26,000 years ago (like a cosmic Groundhog Day).

Only, at that time our planet was zapped by a low frequency (12:60) beam, fell into a state of amnesia, and detoured into the cycle of “history” – a one-dimensional dreamspell of materialism and material expansion.

The purpose of this 12:60 beam was to inseminate Earth’s electromagnetic mind field with artificial time which erases cosmic memory.

The Dreamspell codes, left by the galactic Maya, are a gift meant to help correct the memory virus and regain star memory. These codes lay out a system of time magic or chronomancy, the power that brings any time, past or future, into the present.

A main purpose of the Dreamspell codes is to remember that we are actually time travelers traveling on not a spaceship, but a timeship: Timeship Earth 2013.

In this way, the Dreamspell codes are both a living mathematical matrix and an entire psychomythic cosmology.

The 13-Moon 28-day calendar is the harmonic software that enters your mind stream into this galactic program where these codes can be accessed and the memory of the original mission regained.

These three geneses pass through five castles that make up Timeship Earth. The five castles represent the powers of birth (red), death (white), magic (blue), intelligence (yellow) and synchronization (green). Each castle consists of four 13-unit “wavespells”, for a total of 52 steps per castle. All five castles total 260 steps. 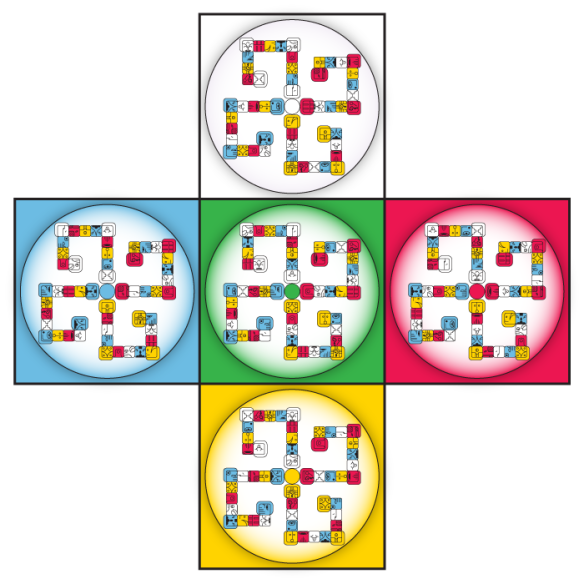 Here is a brief overview and exploration of the three genesis:

What was the human mind like at that point in time? Something happened to initiate a process—the beginning of homo sapiens, the modern genetic type of human that we are. Some type of mutation or shift occurred at that point.

According to the Dreamspell, memory codes from Neptune were encoded into the human species during the Dragon genesis as well as the prophecy codes including the 13 baktun cycle of history.

As The Arcturus Probe states: “Through the dragon’s Neptunian nurturing, the tribes of time dreamed themselves human…”

During the Dragon genesis the human species lived as one family in telepathic attunement to the dreamtime. When people went into the dreaming they placed their heads together in a circle around a fire that creates an imaginal dream dome.

The symbol of the dream dome is key here as to how the Dreamspell genesis was first brought through the dreamtime to earth.

In 1983, Jose Arguelles/Valum Votan had a dream when he suddenly saw a dream circle and people lying down in a circle around a fire with their heads gazing toward the sky and he heard the words “Earth Surrender Rite.” This was the original vision that came to be the Harmonic Convergence 1987.

A few years later in another dream vision, the symbol of the dream dome came again, but as a “break” in the dream 13,000 years ago. He saw people in their dream domes and the dream or “dreamspell” was somehow broken. He had had a similar vision a few years earlier about the breaking up of Atlantis thirteen thousand years ago.

Here is the original dream of the Dreamspell from 2012: Biography of a Time Traveler:

In the dream, he saw waves gathering…domes…glaciated hillsides…another world, another time…mastodons…hunters… the world was younger…thirteen thousand years ago…people…then another wave gathered and, Crash! something calamitous occurred, followed by a great apocalyptic shattering.

The original collective dream was broken. What happened? No one could remember.

From the midst of the crashing the word Dreamspell emerged as an evocation uttered by an ancient voice. Fragmented memories were scattered and deposited in isolated pockets of the collective human mind. They were the seed forms of everything that is now culminating in the state of the present world.

What happened then was the breaking of one Dreamspell and now we are in another Dreamspell. 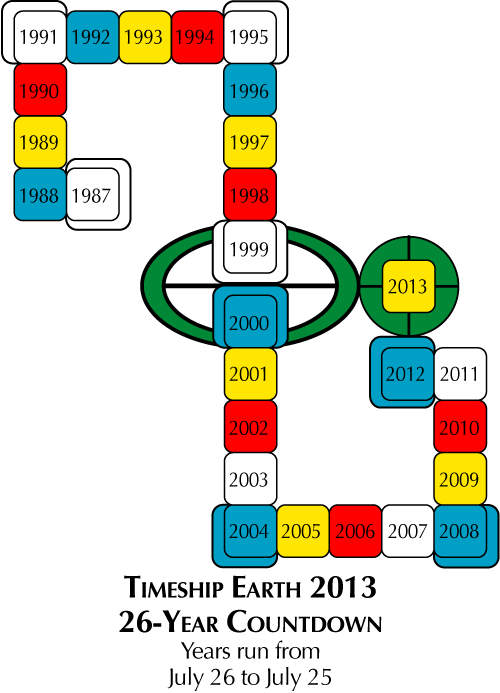 The counterclockwise wavespell running from 2000 to 2012 represents full entry into the fourth dimension and galactic time, with the final step in 2013.

There are 16 years between 1997 – 2013 as laid out in the program of the 20 Tablets of the Law of Time.  A main purpose of this sixteen year cycle is to help establish the human mind and consciousness again in the Dragon and Monkey genesis—like getting the needle back in its proper place on the record.

”Sixteen years to create the Cube of the Law, 26 years in all, the fractal zuvuya of 26,000 years of cosmic creation, to establish resurrection in the fourth-dimensional mind of the Dominion of Time.”

The first of the 20 tablets recapitulates the first 1,300 years—the Dragon Genesis—this is when the Neptunian memory was implanted with all of the primal archetypal visions, myths and memories (including archetypes of the wizard and the dragon).

Some of these memory codes are buried so far in the unconscious that for most people it is hard to fathom. But these archetypes still continue to inform dreams and visions.

These encodings are a function of the psi bank, the regulating mechanism or “control panel” of the noosphere, Earth’s mental sphere. The psi bank is ultimately a mathematical matrix that serves as both a memory and storage retrieval system and is responsible for the regulation of DNA and the release of timing programs.

When the Monkey Genesis begins we are not in the dream domes anymore. At this stage in the interplanetary drama, two planets in this solar system had ended in destruction: Maldek, the fifth planet (now Asteroid belt) and Mars, fourth orbit, that became extinct.  At this state the Dreamspell manual states:

To keep the planetary deterioration from taking the third planet with them and so destroying Kinich Ahau’s chances of sounding the galactic chord the planetary kin must stabilize the Earth.  —Dreamspell manual

After the Ice Age was over we went out of the cave into the world of appearance and were equipped with certain “magical’ powers to begin the galactic seeding process.

The Monkey genesis ends where Egypt begins. It was the time when the codes of magic and illusion were laid.  In alchemical texts very often a monkey represents a human trying to learn with its limited nature. Thoth was always shown as a monkey and represents ancient wisdom.

In Dreamspell cosmology, the monkey represents solar/prophetic Venus. Neptune and Venus are twins in the Telektonon circuit. The Mirror (Neptune) holds the telepathic circuit for memory (Dragon) and the Monkey (Venus) holds the instinctual circuit of memory, which is transformed into the power of magic (the knowledge of illusion and manifestation).

The Monkey genesis is 78 dreamspell centuries or 7800 Earth years, and with the Dragon genesis of 130 dreamspell centuries completes the 208 steps to Merlin’s magic tower. 78 is a fractal of 780, the Martian synodic cycle. It is also key to unlocking the meaning of the tomb of Pacal Votan

The Monkey genesis was also the time of Camelot when the 13 moon cycles were learned by humans. The remnants of the 13 moon calendar are found in the Druid, and Andean Pachacuti 13 Moon calendars that came from this genesis.

Camelot is the name given to the common understanding or mind of the twenty tribes during the mysterious 7,800 Earth years following the Dragon genesis and preceding what was to have been the Moon genesis. During the Moon genesis Camelot was to have expanded into the kingdom of heaven on Earth.” —J. Arguelles, The Arcturus Probe

This genesis was intended to be the beginning of a real Golden Age, but instead a “theft in time” occurred and a lower density beam (12:60) struck Earth and we entered the “dreamspell of history,”  where we all got amnesia (3113 BC or Dreamspell years -3187).

This theft in time was the result of the Jupiter/Maldek effect, which causes many of our underlying unconscious thoughtforms and behaviors now.

When Maldek was destroyed so were the original flux tube systems that connected all the planets at their poles (an etheric electromagnetic system of tubes or tunnels that also connect it with the star, Kinich Ahau or Sun).

This splitting apart was actually a vibration or a resonant effect–a shattering that occurred as we were about to enter the Moon genesis when the 12:60 time beam struck. We see this potential replay happening now in our world with the accumulation of atomic bombs and extra low frequency technologies.

In The Arcturus Probe, Merlyn the wizard gives his account of the 12:60 beam hitting:

There I was in the groves of Brython, dancing with the talking stones, when the 12:60 beam lanced the timeship. All the winds halted. An eerie silence fell across the Earth, as before an earthquake. Shadows intensified and lengthened. After this moment, one thing was evident: the birds and many other creatures withdrew their telepathic language. The age of the Babylonian lottery had arrived.

So this 12:60 beam hit Earth and the effect was to create a low frequency on our planet, enslaving the human mind into artificial time where we became slaves to money and machines and forgot our cosmic essence.  In The Arcturus Probe, Merlyn the wizard describes it as follows:

The blanket of third-dimensional amnesia spread throughout the holy and sacred timeship like a poisonous gray fog. The most insidious aspect of this gray amnesiac fog was that it made those afflicted believe it could be no other way.

This 12:60 beam also created much of human neurosis including sex taboo, deathfear, false spirituality and material greed, as detailed in the Telektonon prophecy.

The Telektonon introduces fractal time compression and the 20 Tablets of the Law of Time is a special application of the Telektonon (as well as the 7:7::7:7 revelation, Mystery of the Stone, etc). This 28-day Telektonon circuit is keyed into the 13 Moon calendar and is also a function of the interplanetary time map coordinated by the Dreamspell Genesis. http://www.lawoftime.org/lawoftime/level2.html

The main point of the Dreamspell codes and the entire galactic Mayan engineering project is to help keep Earth from going the way of Mars and Maldek and to provide an opportunity to switch tracks into an alternative or parallel reality at an appointed moment in time. It is an interdimensional script. This is also a main theme of the Cosmic History Chronicles, a coded text to help reorient the mind to a new galactic knowledge base in preparation of a time shift.

By fractal analogy, the 13 Moons of the Blue Resonant Storm Year ( 2012 – 2013)  are the last 13 steps of the Monkey genesis. It is at this point that we begin the final steps of the 260-step fortress of Timeship Earth, the Moon genesis of magic flight.

By fractal analogy the 13 moons of the Yellow Galactic Seed Year (2013-2014) are the first 13 steps of the Moon genesis, when we enter the Green Central Castle of Enchantment: Court of Synchronization, the ultimate Harmonic Convergence.

From that day on everything changed. The parallel Earth entered the parallel 13:20 time of the fourth dimension …