There is nothing stopping the imagination from envisioning a civilization whose core is a system of telepathic technologies.     –J. Arguelles

In the Biography of a Time Traveler as well as Time, Synchronicity and Calendar Change, I attempt to illustrate how the life pattern of Jose Arguelles/Valum Votan was a code unto itself, a type of synchronic blueprint. He was a galactic messenger deeply tuned to the inner vibrations of the planet and star system as a whole.

For example, in 2001, he had a “chance” meeting with prominent Russian astrophysicist, Alexey Dmitriev. Jose had been studying the work of Dmitriev since 1997—specifically his work on the plasma universe model and his heliospheric research—and two years prior had produced the 7:7::7:7 Telektonon Revelation, which is a practice of fractal time compression based on Dmitriev’s plasma universe model combined with the Law of Time. 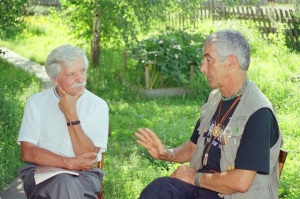 When he finally met Dmitriev, they both “just happened” to be at The Roerich Museum in upper Uemon Valley in Altai, Siberia on the same day. Also as it happened, he learned that Russian artist and mystic Nicholas Roerich had been at this precise house exactly seventy-five years prior to that day, Magnetic Moon 13 of the Blue Galactic Storm year, Kin 111 (August 7, 2001).

Of course Nicholas Roerich had also had great influence on Jose’s work and in 1992 he and his former wife and partner Lloydine had adopted the Roerich peace banner as the official symbol of the 13 Moon Calendar Change Peace Plan.

As mentioned in the last blog about subterranean cities, Roerich and his wife Helena were on a search for Shambhala, which is also associated with Agartha—a mythic and mystical subterranean realm peopled by advanced beings who keep watch of the surface Earth.

Nicholas Roerich was also concerned with sunspot cycles, cosmic radiation and their role in the coming planetary transformation, very much to the point of Dmitriev’s research. (see Planetophysical State of the Earth and Life). 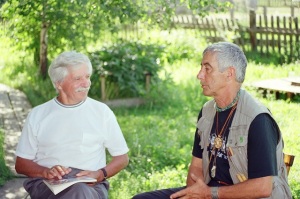 So it was here, where Nicholas Roerich had stood 75 years earlier, that Jose encountered Dmitriev, whom he exchanged ideas with regarding  the disturbed and disturbing artificial electromagnetic field created by the human technosphere and its effect on the solar system, foremost among them.

According to Jose, the main topic of interest to Dmitriev was the “self luminous zones” or structures in Altai and elsewhere in Siberia where the Earth’s core connected with interdimensional vortices, entry into which connected one with Earth’s etheric body.

The spontaneously appearing self-luminous structures recorded and reported at these points were, according to Dmitriev, actually aspects of Earth’s future etheric body entering into the present moment in time.

As we know, solar activity is increasing and expected to peak in 2013.

Recently, Dmitriev has warned to prepare for the “Global catastrophe, not in tens of years from now, but in ones of years.” He claims that what his happening within the sun is much more severe than what NASA or governments are telling us.

He revealed that both Voyager 1 and Voyager 2 probes reported the entire solar system is at risk, and that our solar system has entered an immense, potentially deadly, interstellar energy cloud.

Dmitriev also asserts that a photonic cloud of energy is exciting the atmospheres of the planets and especially our sun. As this interstellar energy cloud continues to excite and interact with the sun, it causes the sun to become more active, resulting in greater output and instability.

About six moons ago the National Oceanic and Atmospheric Administration, a federal agency that focuses on the condition of the oceans and atmosphere, issued an urgent warning stating that a severe solar storm could cause global disruptions in GPS systems, power grids, satellite communications, and airline communications.

There are also approximately 440 nuclear power plants operating across 30 countries around the world today with hundreds more either under construction or in planning stages. 104 of these reactors are in US. 195 in Europe.

We have seen from Fukushima the effect of nuclear meltdown. We know that this is a real possibility anywhere.

If a solar flare hits Earth, as has been anticipated, and the grid goes down, this means the electricity that it takes to cool these nuclear reactors goes out. They do have back up generators, but they only last a out a week or so before the nuclear systems go into meltdown.

So what are we supposed to do?

It is wise to consider this possibility and think about alternative energies, creating or joining an already existing sustainable eco-community, detoxifying the body to help it endure potential future hardships, meditating on a daily basis to develop a mind that can withstand the collapse of illusions, and planting your own or small community gardens … but you will have to start now.
—J Arguelles, Manifesto for the Noosphere

To offset the worst case scenarios Jose has initiated global synchronized meditations, based on a precise time science coupled with the belief of the power of a collectively unified mind to create positive change.

These practices are geared toward stabilizing the Earth’s poles, namely the circumpolar rainbow bridge meditation, which is actually a scientific practice based largely on Dmitriev’s plasma universe model. The basis of this practice is found in the 7:7::7:7.

The 7:7::7:7 practice is part of a time-release program directly related to solar flares and, as the manual state, is “a function of the excitation of plasma to which our solar system (heliocosm or heliosphere) has been subjected since the stellar excitation arousal of Supernova 1987A, “Quetzalcoatl.”

In the 7:7::7:7 practice, plasmas are defined as consisting of equal amounts of ions and electrons, being conductors of electricity and affected by magnetic fields. The 7:7::7:7 practice tells us that the origin of the energetic plasmas is peripheral to the nucleus of the galaxy (Hunab Ku).

The energetic plasmas are responsible for evolving the solar system, according to Dmitriev’s plasma universe model.  And we know that the solar system is rapidly evolving along with the Earth.

“At the present time researchers are revealing some of the causes leading to a general reorganization of the electromagnetosphere (the electromagnetic skeleton) of our planet, and of its climatic machinery … the climatic and biosphere processes here on Earth (through a tightly connected feedback system) are directly impacted by, and linked back to, the general overall transformational processes taking place in our solar system. We must begin to organize our attention and thinking to understand that climatic changes on Earth are only one part of a link in a whole chain of events taking place in our Heliosphere.

The 7:7::7:7 manual states that the electromagnetosphere is inseparable from the psi bank, the evolutionary biopsychic organizing mechanism of the terrestrial biota in its entirety. 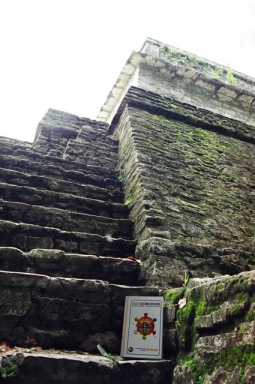 The practice of the 7:7::7:7 is synchronized with the 13 Moon 28-day calendar and can be followed daily.

In this practice, the telepathic mind is engaged with the phenomenal reality represented by the seven radial plasmas, which, in turn, activates the “rainbow brain” of the Earth. This is a key practice to the global visualization of the ejection of the circumpolar rainbow bridge.

Jose referred to the practice of the 7:7::7:7 as “unlocking the quantum physics of telepathy.” The basis of this practice are the seven radial plasmas which came to him in the form of an extraterrestrial text as described in detail in Time, Synchronicity and Calendar Change.

These seven radial plasmas, identified with the magma at the center of the Earth, are conducted from a point of origin close to the center of the galaxy through the Earth’s terrestrial poles and into its crystal core. As the 7:7::7:7 manual states:

These seven radial plasmas are essentially fourth-dimensional electronic fluids, which can be telepathically activated into the radial matrix of fourth-dimensional time. They are primary energetic fluids used by the mental self-creating processes, which underlie the order of the universe, a function of higher evolving consciousness itself.

This circumpolar rainbow bridge practice has been developed and is already being practiced worldwide. Of course, the more people who practice the better (soon we will have all the details for this global telepathic practice up on http://www.lawoftime.org).

This (practice) calls for a large number of small groups dispersed around the planet yet unified by the same focalization exercise: to send a collectively unified “brainwave” with the image of the circumpolar rainbow bridge to interact with the auroras and electromagnetic field so as to extend the auroras to the equator; connecting them there permanently. The result would be an auroral rainbow bridge, in two sections 180 degrees apart. If the solitary medicine man could make a thunderstorm and rain with his focalize d brain waves, so a collective of unified biopsychic cells dispersed around the planet acting as a common noosphere projectionist could make this exquisite work of planetary art.
—J. Arguelles, Manifesto for the Noosphere

The Circumpolar Rainbow Bridge synthesizes analog functions of the biopsychic, electromagnetic and geomagnetic fields of resonance in a correspondence between planetary and human body axial identification and simultaneously collective telepathic projection.
—Dynamics of Time, 9.10