The Earth has a mind of its own. It is up to us to synchronize with this mind. In bringing down that which is above, it raises up that which is below.

There are places on the earth where the new, purified energies can be palpably felt; where it is easy to connect with the spirit of the earth. The Shire Farm in Tetford, England is one of these places.  I had the privilege of experiencing this energy for the second year in a row in a five-day event to celebrate the Day Out of Time and New Year.

Located close to Earths Prime Meridian (zero longitude), Shire Farm is a powerful vortex that links with the subtle dimensions. The people who work the land exude a calming sense of spacious yet grounded peace.

The 500-acre Farm is overseen by Chairman Mike Booth, an advocate for biodynamic farming (and an all-around planetary artist and earth wizard).

According to author and planetary geomantist, Richard Leviton, Shire Farm is the site of a major geomantic wisdom temple of planetary significance. This site is also what Jose Arguelles/Valum Votan called a noosphere reserve, an interactive energy field that interfaces with cosmos.

The noosphere is not only the “thinking layer” of our planet, but extends into other dimensions as well. When we enter these types of forcefields we realize that we are an extension of an evolving consciousness.

The workshop was co-created with Mike Booth and Avani, Electric Eagle, with the intention to ground the new vibration and galactic frequencies into the earth and accelerate conscious awakening. 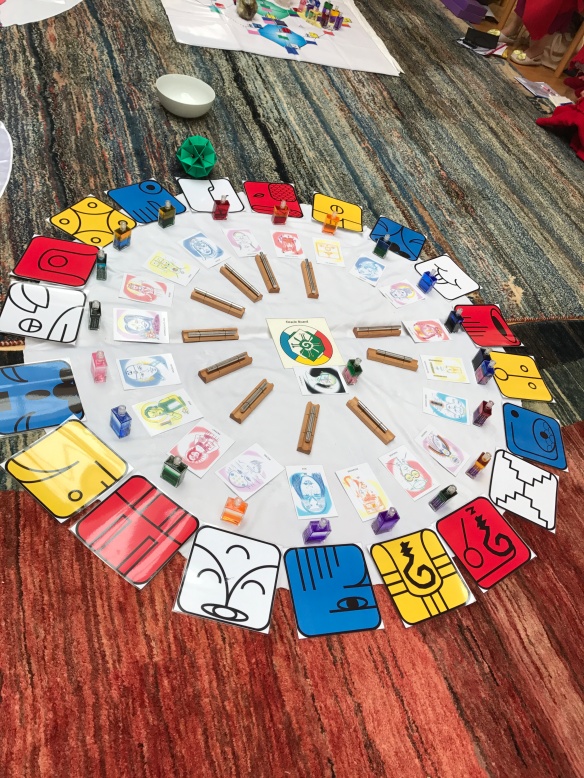 On the Day out of Time, we walked the magical mile-long chakra path which contain powerful imported stones from all over the world. Many of the stones are inscribed by cosmic sculptress Kersten Schipper, which amplify the vibrations.

Each of us meditated on our solar seal chakra and radial plasma according to the codes of the Law of Time. For me that was Crown and Solar Plexus. At the crown is a statue of archangel Michael with crystals buried below. 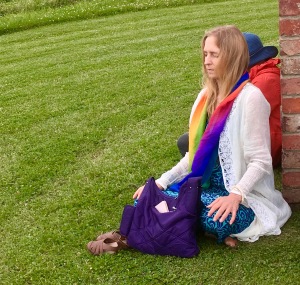 Time stood still as a spacious simplicity overtook my being with a deep feeling of well-being and that no matter what, everything was going to be OK.

Tools, codes, keys and colors are our helpers. Discipline within these systems is for the purpose of raising our frequency which builds a scaffold to other worlds or dimensions.

Our purpose is to spiritualize matter or to externalize the light of our inner being. Deep relaxation into the Present Moment brings about a resonant exchange with other Life upon the planet and beyond.

Kersten also inscribed the 20 solar seals of the Law of Time into stone. These seals were then placed in the geometrical layout of the Hunab Ku 21 (as brought forth by Jose Arguelles/Valum Votan). This powerful configuration creates an archetypal interface from human to the land, grounding the new frequencies.

The first seal is the Dragon (the Primal Force) and the last seal is the Sun (Enlightened One). Dragon nurtures all life as the leylines that run through the earth (dragon lines). Sun is a star that represents the focalization of galactic energy in a particular field.

The stars, including our Sun, are the receivers of the streams of life and knowledge emitted by the Hunab Ku (central Source) meant to be evolved in the myriad star systems of the Universal Order.

The structure of the Hunab Ku is a tool of meditation. Between the 21 seals there are 52 connecting paths that complete the construct of Hunab Ku 21.

These represent 52 weeks in a year. The 21 seals constitute both the archetypal design template of the galaxy, as well as the primal construct of galactic consciousness.

In the galactic order, the form of the galaxy and the nature of the consciousness are one and the same.

Because of the harmony of nature at Shire Farm, there is a sense that the spiritual light can easily interface with the earth energy. The result in the human is the opening of the heart or love force where these two lights meet. The Noosphere is felt.

At the heart of Shire Farm is a deep caring and nurturance of the Earth. As Mike Booth writes:

“Speaking to the deeper nature of biodynamics, it’s important for us to have a thinking and feeling relationship with nature in every part of the life cycle. By collaborating with the “egregor,” or consciousness of the land, we can come into harmony between what it wants for its own well-being and what our needs are.

This involves an attunement with the overall energetics and elementals of the land, and also the devic (nature) spirits and angelic beings that work with the beingness of each plant and field and section of the farm. In this way we respect the earth as a vital partner in our mutual well-being, because we understand that each must receive what is needed to thrive in health and wholeness so that all may thrive.” 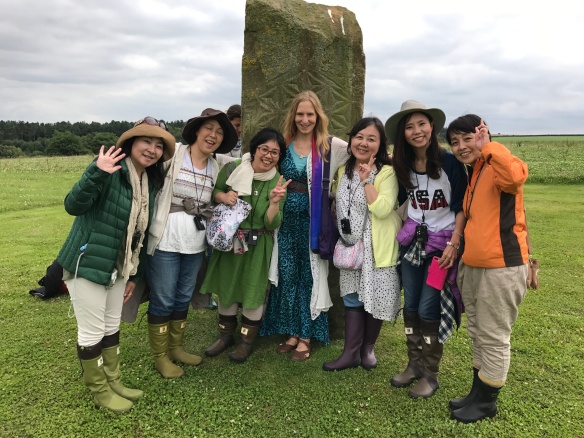 On Cosmic Serpent (July 27) we went to the land to meditate with the newly carved Quetzalcoatl stone.

After invoking the power of Quetzacoatl and the sign of the oroborus, powerful energies were felt. We had spoken earlier in the day about Noah, genetics, DNA, and the Ark, we did a group Rainbow Bridge meditation. Soonafter a double rainbow appeared! A good sign!

Four years earlier in Mt. Shasta, we held a ceremony to open the New Galactic Beam. Later that day a double rainbow appeared. 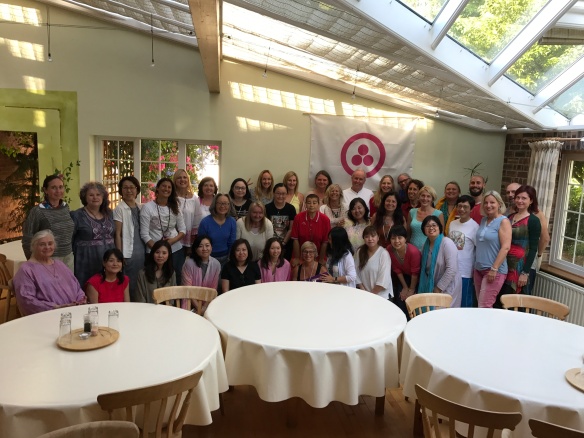 15 thoughts on “Shire Farm, Earth Geomancy and Day out of Time”

Leave a Reply to Marian B. Cancel reply