The dream we dream is dependent on the time we keep …In the cosmic dream we remember that which we originally dreamed. We are here to complete that dream, and we are here to restore harmony to the synchronic order of life.

—José Argüelles/Valum Votan, 28 Meditations on the Law of Time

This day marks the 80th solar return of the birth of Jose Arguelles/Valum Votan, who was born a twin on his mothers 30th birthday and his parents 11th wedding anniversary.

In honor of his birthday, here is  a key excerpt from his life from Time, Synchronicity and Calendar Change, the Visionary Life of Jose Arguelles.

This chapter excerpt tells of his original vision of the Telektonon Prophecy of Pacal Votan. and is very timely for the situation we now find ourselves in on Planet Earth.

Human history is the struggle to remain open. Time and again human consciousness fixates, and slams the door on its greatest gift , the open- endedness of infinite possibilities.
—José Argüelles, The Transformative Vision

José woke unusually early on July 26, 1993, Kin 144, and began reading the book De Tulan el Lejano (From Distant Tulan), which claimed to be a translation of a Mayan codex, though it appeared to him as almost a science fiction story.

He had received the book from Dr. Z’ek Balam, a Mayan healer in Mexico, who had asked his good friend, Mother Tynetta Muhammad, to pass it on to him. He had just received it the day before and eagerly looked forward to this morning when he could finally read it.

The book described a number of travelers from the star Tau Ceti (Tollan) who were traveling, not in a spaceship, but in a timeship.

This timeship experiences a type of shipwreck on planet Earth bringing with it various archetypal figures in the history of the Earth including Buddha, Christ, Muhammad, Homer and the Mexican prophet, Quetzalcoatl.

The origin of the ship is Tollan in the constellation of Cetus (whale). See full manuscript here: http://lawoftime.org/thirteenmoon/fromdistanttulan.html

Learning about this shipwreck was a trigger that opened José’s memory, causing him to fall into a deep meditative state in which he viewed Earth civilization of the human as a vast Cineplex theater with countless simultaneous kaleidoscopic projections from.

Many different past and alternative world systems playing out in a compellingly parallel array of dramas. The main theme seemed to be the images of the vaulted tomb of Pacal Votan. 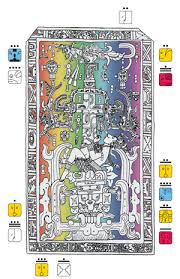 It was as if he were actually in the crypt itself. From this tomb many time tunnels radiated outward.

In one time tunnel he passed up and down different sets of stairs leading to the tomb until he came to what appeared as a central control panel of the radial tunnel system.

From this vantage point, as if watching a movie screen, he witnessed the unfoldment and evolution of the human race. His attention was drawn to the particular 5,125 year test period in the experimental free will test zone.

He saw the artificial reality being superimposed over Nature and the machines move in to ultimately destroy the planet.

He saw that the way people were living would destroy them in the end, unless they consciously, as a single species, made a shift in consciousness and went back to living in natural cycles.

Pulling himself away from this moving, radial, kaleidoscopic experience, he went to his bookshelf, grabbed the Spanish edition of the Book of Chilam Balam of Chumayel, the sacred prophetic text of the Yucatec Maya dating from the time of the Mexican Conquest. http://www.sacred-texts.com/nam/maya/cbc/index.htm.

He spontaneously opened to page 144, where he read the beginning of the prophecy of the mysterious Antonio Martinez: “… and so they read to him the Book of Seven Generations, and it took three months …”

In an instant, he realized that the entire tomb of Pacal Votan, whose mystery had led him to this point in time, was actually a prophecy in the form of a terma, a hidden “text” or treasure. In this tradition, terma was often hidden beneath rocks or in caverns and often written in a symbolic script.

From his previous studies, José knew that the Book of Seven Generations, mentioned only twice in the Chilam Balam, was the key to the prophecies of Pacal Votan.

The Book of Seven Generations is mentioned in the prophecy of Antonio Martinez and is dated to 1692, exactly 1,000 years after the dedication of the tomb of Pacal Votan A.D. 692.
A year earlier, all the books that made any mention of Votan were burned [or confiscated] by the Spanish priests. In 1692, a Spanish priest then wrote The Trials of Votan.

A startling set of synchronicities began to unravel.

From Distant Tollan was published in 1978 in Havana, Cuba—the same place Antonio Martinez sets sail in the prophecy of Chilam Balam.

Like the shipwrecked time traveler in From Distant Tollan, Antonio Martinez was also a shipwrecked sailor.

Like Martinez, José realized he was receiving a “reading” of the Book of Seven Generations. This was the key that opened him to a vast storehouse of memory that he likened to a “star memory retrieval process.”

… At this time José was living with his wife, Lloydine, in a late industrial age house on two acres of land on an estate in the northern part of the Big Island, Hawaii, close to the same latitude as Teotihuacan, Mexico (19.5, same as Face on Mars and see more here: http://www.vortexmaps.com/planets.php).

(Synchronically 10 years earlier Jose met Richard Hoagland who showed him images of the Face on Mars which led to his vision for Harmonic Convergence).

Further contemplating the tomb of Pacal Votan, José knew it would never have been discovered but for the tile speaking tube, which archeologist Alberto Ruz Lhuillier noted in his diggings at the top of the Temple of Inscriptions. While Ruz called the remarkable tube that led directly down a long flight of stairs to the tomb a “psychoduct.”

José had often wondered what its purpose and actual name had been. In this visionary and contemplative state, he heard whispering voices and felt the presence of what he perceived as inner earth spirits.

Suddenly a word formed in his mind, like a sudden thunderclap: Telektonon! That’s it, he thought: Telektonon is the name of the earth spirit speaking tube of Pacal Votan.

He realized that what was being revealed to him was a prophecy of the mysterious sage, a prophecy for our time.

.In 1952, the tomb of Pacal Votan was opened in Palenque after being sealed for 1,260 years. One year later, in 1953, José’s father brought him and his twin brother, Ivan, to Teotihuacán, Mexico where he had his first vision atop the Pyramid of the Sun.

His 1987 book, The Mayan Factor, posits that with the opening of the tomb of Pacal Votan came the initiatic seeding of the Galactic Mayan mind transmission on Earth. José knew the meaning of this tomb was far beyond being an archaeological relic or enigma.

He begin to have further realization that he was the recipient of a consciously focussed beam of information that had been (and is being) transmitted from different planets, star systems [and interdimensionally]. He referred to this information stream as GM108X.

He first became conscious of the “108X strand” in 1981 when he was writing the Art Planet Chronicles – the Making of the Fifth Ring, a novel set in the future from the perspective of the star system Arcturus.https://lawoftime.org/product/the-art-planet-chronicles/

He understood the essence of this strand as a consciously focused beam of information that had been (and was being) transmitted from different planets and star systems.

In a flash, he realized that he had been carrying this GM108X strand his entire life, but could only articulate it now.

In his meditation he saw that this GM108X transmission beam is directed through the North and South poles where information is stored at the Earth’s core within an octahedron magnet that holds the polar positions in place. Around the core, there is a resonating tympanum that he perceived as the world of the inner Earth.

From this inner earth,  information resonates out, according to the present stage of evolution on Earth. This information includes different modalities of thought, culture, life, spiritual truth and ways of being that radiate from the core of the earth to the psi bank; they then filter down into the earth held as inspirational thoughtforms that are picked up by those who are open and receptive, namely artists and musicians of all types.

Having become skilled at the internal art of what he refers to as “earth diving” in 1987, José was able to visually view the psychic or astral configurations of the energy grids of the planet.

This art is something that can be cultivated by anyone through consistent meditation practice. He understood that everything done to the earth has a registration in the astral dimensions. He could see in particular the disastrous magnetic perturbations of the effects of what he referred to as unrelenting materialism and proliferation of technology that coincided with the abuse of the Earth.

As described in his 1987 book, Surfers of the Zuvuya, the purpose of earth diving is to generate energy into the core of the earth. It is done by giving instructions to your fourth-dimensional or astral body to dive into the center of the Earth and locate your particular node in that grid or lattice system. You are to follow that harmonic gridline that goes from the center of the earth to the surface of the planet and then you are to strengthen the corresponding grid that runs along the surface. e energy generated in the core of the earth will gather in a pool on top of the planet and will assist those people who are working on behalf of the Earth.

José saw how his radial tunnel experience to retrieve the Telektonon had been a form of Earth diving.

When the GM108X stream was finally revealed, José recognized that he was the recipient of information transmitted at a high telepathic frequency. is information stream guided him to paint the Doors of Perception; create the Whole Earth Festival (1970); write texts like Earth Ascending, The Arcturus Probe, and The Mayan Factor; call for the Harmonic Convergence; decode the Dreamspell; discover the Law of Time; and, reveal the Telektonon Prophecy. This thread would later culminate in the between the worlds transmission of the Cosmic History Chronicles and Synchronotron …For more about Jose’s life see Time, Synchronicity and Calendar Change, the Visionary Life of Jose Arguelles: http://lawoftime.org/time-sync/