A wave of sadness rippled through the planetary body today as we watched the magnificent cathedral of Notre Dame go up in flames on Planetary Moon 12,  Kin 172: Yellow Electric Human/April 15, 2019.

The significance of the destruction of this ancient icon will continue to unfold and much will be written in the coming days and years to come. But no matter the cause or case, this was a time released event that is a deeply coded synchronic punctuation mark.

Much could be said, but for the sake of this particular blog entry I will lay out some synchronic skeleton keys for others to unlock and decode.

The cathedral structure was completed in 1260, one-hundred years from when its construction first started. It was remodeled in the thirteenth century and partially restored in the nineteenth century, with many codings and subtle keys held within its framework.

13 thousand oak trees were used in the construction of the cathedral, and originally there were 28 statues along the main facade. (these were decapitated in 1793 in the French Revolution)

The interior space of the cathedral is 108-feet.

The spire, which was originally built as a bell tower, and has been standing since 1852.

Also, there are 140 steps leading up the bell tower.

The spire was adorned with copper statues of the 12 apostles of the New Testament.
Christ  is  the  hidden  13.

Note on the 13-Moon calendar, the Easter psi chrono unit is Yellow Overtone Sun, Kin 200, signifying the redemption of the 7th lost generation.

During the time of the fire, the Cathedral was in process of being reconstructed at an estimated cost of 169 million, as reported by the New York Times.

Kin 169 codes this Red Cosmic Moon year, with its affirmaiton: “I endure in order to purify.”

Simultaneously to the burning of the Cathedral was a fire at revered Al-Aqsa Mosque compound in Jerusalem. 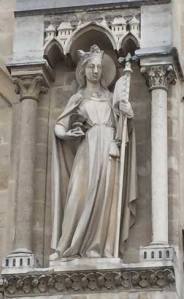 13 is the number associated with the sacred feminine, as well as the serpent. Notre Dame, means “Our Lady” in French and is said to be dedicated to Mother Mary.  Though many believe that this and other significant Gothic structures throughout Europe were actually dedicated to Mary Magdeline, Jesus’ consort.

This document relating to Rennes-le-Château appeared in the Bibliothèque Nationale de France in 1967, but its origins are a mystery. Each verse is named after the 12 signs of the zodiac, and with an extra sign Opiuchus, the serpent-bearer to make 13.

It is verse 7 associated with Leo that mentions Magdeline and Notre Dame. Here is the full verse:

I am aware of the scent of the perfume which impregnates the sepulchre of the one I must release. Long ago, her name was Isis, Queen of the benevolent springs: COME TO ME ALL YOU WHO LABOR AND ARE HEAVY LADEN AND I WILL GIVE YOU REST. Others know her as Magdeline with the celebrated vase full of healing balm. The initiates know her to be NOTRE DAME de CROSS. 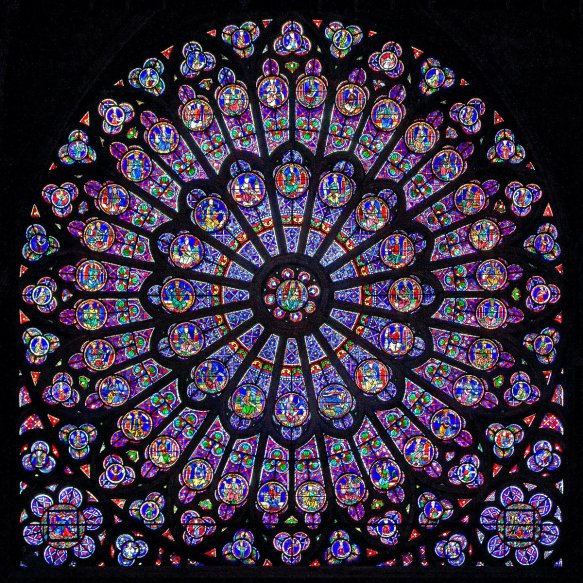 The cathedral contained three Rose windows, one of which was supposed to be the biggest glass window in the world produced in the 13th century.

Since the fire at Notre Dame occurred in the fire sign of Aries, I was drawn to read the entry for Aries in Le Serpent Rouge:

“In my arduous search I was trying to hack away with my sword through the dense vegetation of the woods. I wanted to reach the place of the “Sleeping Beauty” in which some poets can see the Queen of a lost Kingdom. Desparate to find the way, I was aided by the parchments of my friend, they were for me like the thread of Ariadne.”

It also must be noted that in 1909 the courageous Joan of Arc was beatified in the Notre Dame cathedral by Pope Pius X. 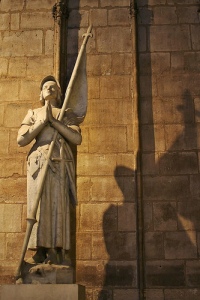 Notre Dame is known for its Good Friday ritual when people from all over the world flock to kiss the crown of thorns. The Crown of Thorns, along with other relics of “Christ’s Passion” were allegedly bought by King Louis from the Latin Emperor of Constantinople.

This crown, along with other relics, was apparently saved from the fire.

32 years ago, The Mayan Factor: Path Beyond Technology was released on Good Friday, April 17, 1987, Kin 194: White Crystal Wizard. This initiated the path of the Galactic Maya.

Note that Kin 194 is also the signature of the opening of Temple 13, the tomb of the Red Queen, in Palenque, Mexico.

Those who follow synchronotron know that today’s telepathic frequency index is 1326 (13 + 13 = 26). And the kin equivelent is 26: White Cosmic Worldbridger, which is the 13th of 13 clear signs on the tomb lid of Pacal Votan. The base matrix unit is 3 and falls in the fourth time dimension of the Cosmic Cube in the Sirian forcefield. 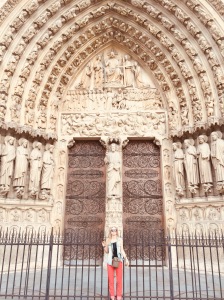