The new dispensation of galactic culture has already been deposited on Earth. It is now awaiting the study of humanity. CHC Vol. 6

Our energy is scattered in too many directions at once. Limited belief systems create fences around our electromagnetic fields keeping us from that which we want most: Full Reconnection with our Creative Source.

People often ask: Why should I follow the 13 Moon calendar or learn the Law of Time? The answer is that you shouldn’t, unless you want to. If you are depressed by what the media has to offer, tired of running the same old tape loops through your mind, in a creative rut,  looking for fresh perceptions or want to gain more memory, then you might want to give it a go.

The path of the 13 Moons reveals the synchronic order, a parallel universe that exists alongside the mainstream narrative. In this Universe synchronicity and art reign supreme. The lens of the synchronic order allows us to view the connections between seeming random events, tuning us into a hidden stream that was always there but we just didn’t have the tools to recognize it.  But it’s more than that …

I offer this  sharing with the intention to tap your own memory circuits and with the realization that everything is happening simultaneously within one vast radial matrix of intersecting time waves.

The Next Gate and the Scroll
Recently on a trip to China,  I had a dream where I was told: You are here to open the Next Gate. I saw a long hallway, dimly lit with many flashing doors. Which door? Which Gate? Which door leads to the next gate? 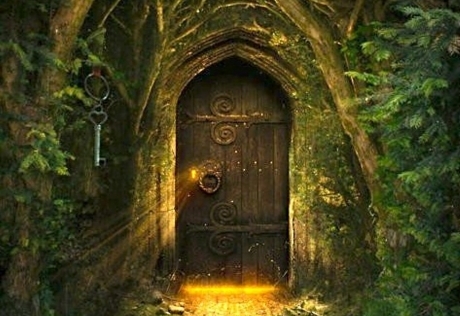 Then I woke up. In the middle of the night I scribbled in my journal: “open next gate”, “forgotten star knowledge” and “zuvuya circuit.”

The “next” gate seemed to have something to do with the zuvuya and how forgotten star knowledge  is intricately woven into our daily lives.

“… on the Zuvuya circuit, memory is the sum recollection of each of our unique wave-forms, past and future, as well as the whole galactic wave-form, of which each of us is a microchip reflection … the key of course to using or tuning into the zuvuya, is to have a clean waveform.” J. Arguelles, Surfers of the Zuvuya p. 134.

Riding the zuvuya back to Christmas Day 2014, Overtone Dragon, I had an unusual experience. That day I was meditating on the Galactic Tree of Life. Someone knocked on my door.  It was a tall blond man maybe in his 30s. He didn’t say anything so I intuitively shut the door, and assumed he had gotten the wrong residence.

That night, I had a dream and the same man appeared at my door. At first I was afraid, then I saw that he was wounded with a bandaged arm and meant no harm. He unzipped a worn-out back pack and pulled out what appeared to be a scroll. He indicated that he had traveled far to deliver this.

Fastforward 2016. I am in Taiwan. I was introduced to a blond man from Sweden who would be my vegetarian cook. I noted that his arm was in a sling. At first I thought nothing of it until he began to tell me his vision of a Scroll. He said in his vision he saw that the Creator of the Universe had created an original scroll that had fallen into the “wrong hands.” He said the scroll was connected to Maldek and was now eating itself.  Once fully eaten a new world could be born.

I was flabbergasted! The synchronic order works in mysterious ways. He was Spectral Dragon, Kin 141, and indicated that he was in his 33rd year. This experience occurred on Kin 66 (33 x 2): White Magnetic Worldbridger.

The “33” tapped a memory of a dream Valum Votan had told me about. In his dream he was contemplating how Shambhala and Tollan (East and West) were two fundamental archetypal forces that need to merge for the Great Shift to occur. In the dream his Tibetan teacher Chogyam Trungpa appeared to him and told him this merging would occur when “the Eastern Sun meets the Western Sun at the 33rd degree.”

With this memory, a key turned from within. I wrote the experience to a few people and received a message turning my attention to the White Pyramid in China, located at around 33 degrees latitude in the Qin Ling Shan Mountains of Shensi Province. Little is publicly known about this massive stepped pyramid constructed of clay, but it is thought to be as old as the pyramids at Giza. This region is also said to contain up to one hundred more pyramids. (Much is written about 33rd parallel, so you can research if interested). Here is a brief introduction.

Following the path of synchronicity, 33 days later I found myself in Washington D.C. visiting the House of the Temple: Supreme Council, 33°, Scottish Rite of Freemasonry. This was on Kin 99 (33 x 3). Head of the Supreme Council of World Freemasonry Albert Pike invented the 33rd degree of Freemasonry in 1832. Much to all of this but I will try to keep a focused stream here.

Back to the New Scroll

In Tibetan tradition there are the yellow scrolls (though the pages are different colors, they are still called yellow). These scrolls often contain symbolic script and are put in caskets made of precious gems, menials, wood, clay or stone. Sometimes symbolic scripts of many teaching are found in one casket and sometimes one teaching is divided.

These scrolls were placed in caskets and entrusted to terma protecters, which are non-human beings or spirits. These are beings who have received teachings from Guru Padmasambhava and have taken a vow to protect the dharma. (see Hidden Teachings of Tibet by Tulku Thondup Rinpoche)

Terma refers to hidden treasure left by a concealer in a former time. It generally contains some type of symbolic script, which when discovered by the predesignated treasure finder, terton, will then reveal some teaching appropriate to the time of its discovery.

Navigating Zuvuya
42 days prior to the Scroll zuvuya experience in China,  I had a lucid dream with Valum Votan where he was driving a car and said the Navigator is Back.

This “Navigator” dream occurred on January 12, 2016: Kin 24: Yellow Spectral Seed, “releasing awareness”. (Kin 24 is 42 backwards. It was also Kin 24 the day that Valum Votan appeared in my dream in 2014 giving the vision of the 812 day cycle of solar consciousness, see previous blog).

In the recent dream he pulled out a map and circled several places indicating the reconnection of circuitries within new beam frequency. The first places he circled were England,  Italy and Paris, France. A few other places were circled, which I cannot remember, but there seemed to a be particular symmetrical patterning.

The next morning I checked my email only to find confirmation of an invitation to go to England for the Day out of Time, and a few days later came the invitation to Taiwan and China.

This year the Day out of Time (July 25) lands on Kin 218: White Planetary Mirror. This is the galactic signature of the discovery of the tomb of Pacal Votan (June 15, 1952).

In England we will have the creation of the Galactic Tree of LIfe with its 21 archetypes laid in marble outdoors at Shire Farm. I will participate in a 4-day event at Dev Aura with Avani, Kin 55,  to present the Hunab Ku Galactic Tree of Life.

There are 52 primary paths of terma to unlock within the Galactic Tree of Life, with its 7 gates and  21 archetypes. This was one of the final revealments in the Telektonon prophecy of Pacal Votan brought forth by Valum Votan as part of the system Synchronotron.

This Galactic New Year (July 26) marks three years since the inception of the New beam on Yellow Galactic Seed (July 26, 2013).

The galactic beam is intelligently focussed creating precise patterns. Patterns of information do not just happen randomly, but are intelligently conceived and projected as holographic structures or images within different time beams. In turn, these time beams inform the different structures of celestial and cosmic reality. –Book of the Timespace

The new beam intelligence contains the fractal matrix from which all other matrices are derived.  It is loaded with new archetypes carrying new scripts. On the Day out of Time we will also participate in a global synchronized meditation to activate the new archetypes and unveil the new Scroll.

By directing our intelligence within a space of relaxed focus we can align our electromagnetic field with the new beam. From this space we can begin to understand the interplay of cosmic forces and receive the memories of archetypal histories of other worlds, forgotten worlds, which is nothing less than the forgotten aspects of our own being.

We are advancing our physical body consciousness through successive stages into states of super and continuing consciousness. Prioritize your own self-realization.